President Obama is determined to wound the American economy further by putting an additional tax on oil. 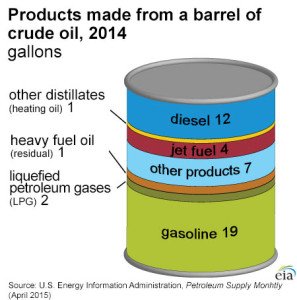 The White House announced Thursday that Obama will propose a $10 tax on each barrel of crude oil produced. At current prices, that represents a 33% increase in the raw material needed to make gasoline, diesel, fertilizer, heating oil, liquefied petroleum gas, plastics, rubber and other polymers.

Obama plans to use the $30+ billion per year in additional taxes to fund clean energy projects like Solyndra, “traffic reduction”, high-speed rail and “investment in clean transport at the regional level” whatever the heck that means.

Increasing the cost of necessities like heat, gas, fertilizer, diesel and manufactured products comes at a time when the American worker is dealing with a stealth recession and has no extra money to deal with price increases. Checking links from The Awakened Wire’s money and economy page illustrates the real trouble the American economy is in:

Gasoline and Diesel are already taxed at the Federal and State level. The feds at 18.4 cents per gallon for gasoline and 24.4 cents for fuel for trucks, trains and tractors. An additional tax will increase costs on Americans in many ways.

Diesel fuel gets products from shipyards and manufacturers to warehouses, then to stores. Transport costs are built into everything from groceries to clothing.

Petrochemicals are used in the production of fertilizer, plastics, rubber and many other polymers that are part of American life.

Obama’s move will move money out of the consumer economy and into the government economy – an economy that produces nothing at great cost. It’s important to note that businesses don’t pay taxes, those are always passed on to the consumer. The middle class will bear the cost of Obama’s clean energy dream that so far has produced no results and billions in losses.

The good news is that his proposal isn’t going to get through the current congress.

“Once again, the president expects hardworking consumers to pay for his out of touch climate agenda,” House Speaker Paul Ryan said in a statement, arguing it would lead to higher energy prices and hurt poor Americans.

Ryan went on to describe Obama’s plan as “dead on arrival” in Congress.

Support Conservative Daily News with a small donation via Paypal or credit card that will go towards supporting the news and commentary you've come to appreciate.
Tags
Barack Obama gas prices taxes