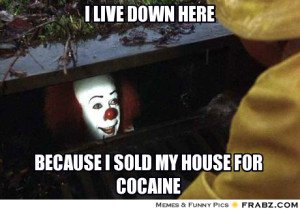 Cocaine is commonly recognized as the baseline for degradation clichés in the US. A product, pastime or vice has made it big when an authority figure compares its addictive power to that of cocaine while warning the public of a looming threat to domestic tranquility.

Once a reporter is told something or other is “as addictive as cocaine” the story practically writes itself. And if the reporter happens to be hooked on cocaine, too, it’s finished in no time.

The senator gets points for concern, but this will be like preventing the spread of humidity.

The trailers and teasers appear to satisfy, so to speak.

Time magazine found a Connecticut College study that claims Oreos are as addictive as crack cocaine to lab rats. And the findings are certainly applicable to humans since the rats eat the creamy center first, too.

The L.A. Weekly contends you can’t go to the grocery store without falling into the clutches of Demon Food, because “food can actually be considered more addictive than crack.” This warning is based on research indicating two–thirds of Americans “have significant difficulties controlling their food intake.”

A phenomena you can witness yourself during Chocolate Buffet night on any cruise ship.

This warning does have a motivational bright side. Now dieters can feel as heroic as Robert Downey, Jr., since they can describe hunger pangs as withdrawal symptoms.

The Daily Mail says being in front of a computer can still be a problem even if you keep your hands to yourself. Swedish researcher Sven Rollenhagen warns the online World of Warcraft has been part of every case of game addiction he’s treated. Yes, “It is the crack cocaine of the computer game world. Some will play it till they drop.”

It’s obvious why the warning industry has so much invested in the “addictive as cocaine” cliché. If cocaine were found to be no more dangerous than powdered sugar, Oreos would vanish from the shelves overnight and Chicken Littles would be verbally disarmed.

That resistance is why the National Survey on Drug Use has trouble getting traction. It found 80 percent of those surveyed who had tried crack — supposedly even worse than cocaine — had not used it in the past year. What’s more, the initial experience appears to have been beneficial to society as a whole. The blow testers also report paying their taxes on time, stopping before turning right on red and never parking in handicapped spaces.

Cocaine effectiveness is also under attack on the chemical side. Some claim Fentanyl — which sounds like something you drink on a date with Bill Cosby — is now the most addictive drug, but I don’t see that cliché catching on. It’s too hard to spell and too hard to pronounce.

The bottom line for me always returns to the messenger: Wouldn’t the expert have had to be addicted to cocaine at some point to be able to accurately compare dependency power and if so, does America want to take advice from a bunch of former crack heads?

Support Conservative Daily News with a small donation via Paypal or credit card that will go towards supporting the news and commentary you've come to appreciate.
Tags
addiction Cocaine Health and Fitness Pornography

What Is Section 230 and How Is It Different Than the First Amendment?

The Gun or the Shooter?