Some people take umbrage at the fact that Martin Luther King, Jr. has a holiday dedicated to his remembrance, while none of our founders, or even presidents, do. I am not among them. In many ways, MLK epitomizes the founding principles the nation was based on, for they, along with his theological convictions, comprised his core belief system. 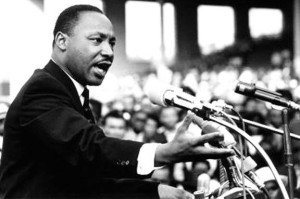 As we celebrate the 87th anniversary of his birth, acknowledgement of his contributions to civil rights and peaceful demonstration for just causes is just a portion of what the man represented. His insights on freedom, work, selflessness, and morality apply equally to all Americans, regardless of political orientation, race, or creed.

Perhaps that was the key to his enduring legacy – not just that he advanced civil rights, but that he taught and expounded precepts that transcended the great social divide of his time. Perhaps there is as much for us to learn from those teachings in transcending and bridging the divisions of our time.

To him, everything revolved around freedom. “I say to you that our goal is freedom, and I believe we are going to get there because however much she strays away from it, the goal of America is freedom. Abused and scorned though we may be as a people, our destiny is tied up in the destiny of America.” This may seem ostensibly a self-evident truth, but the concept is increasingly foreign to too many of us as we look continually to government for solutions, at the expense of individual liberty to choose and to act. 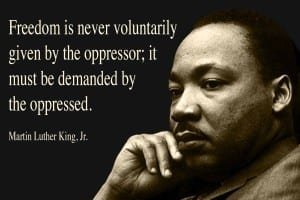 He also stated, “Freedom is never voluntarily given by the oppressor; it must be demanded by the oppressed.” When we realize that much of what’s done in the name of government is oppressive to freedom, it’s increasingly evident that as an electorate we must needs rise up in opposition to freedom-inhibiting laws and regulations, and demand redress.

“Change does not roll in on the wheels of inevitability, but comes through continuous struggle. And so we must straighten our backs and work for our freedom,” he declared on another occasion. Individual and universal freedom was everything to him, without regard to ethnicity or other contradistinction. He advocated freedom, as opposed to government programs that diminish the freedom to build, achieve, to be rewarded for those achievements, and to succeed.

He often talked about how critical it was for all Americans to have a job. To him, a good job was ennobling, and built character. “All labor that uplifts humanity has dignity and importance and should be undertaken with painstaking excellence.” A working society was a free society, for without work, one becomes the ward of the state and loses their individual freedom to become and do.

He was so critical of those whose entire focus was on themselves and their own self-interests. And he made no distinction between the personal and the private; the political and the individual. Said he, “An individual has not started living until he can rise above the narrow confines of his individualistic concerns to the broader concerns of all humanity.” And as if to underscore this notion, “Every man must decide whether he will walk in the light of creative altruism or in the darkness of destructive selfishness.” Clearly those who engage in identity politics for their personal aggrandizement are not looking at the greater good for society and America.

He always emphasized doing, and acting on principles. It wasn’t enough to echo the refrains of freedom, one had to work for them. And at times he seemed to echo the sentiments of Edmund Burke, the English philosopher who said “All that is needed for evil to triumph is for good men to do nothing,” King’s version was, “History will have to record that the greatest tragedy of this period of social transition was not the strident clamor of the bad people, but the appalling silence of the good people.” How can one claim ownership of great precepts, and not be willing to act on them?

“When the architects of our republic wrote the magnificent words of the Constitution and the Declaration of Independence, they were signing a promissory note to which every American was to fall heir. This note was a promise that all men, yes black men as well as white men, would be guaranteed the inalienable rights of life, liberty, and the pursuit of happiness.” Clearly, to King, all lives matter! 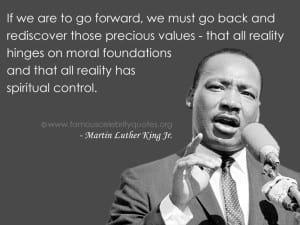 The Reverend was a highly principled man, driven by truths and fundamental values. He referred often to those values. “If we are to go forward, we must go back and rediscover those precious values – that all reality hinges on moral foundations and that all reality has spiritual control.” Some of those values were the very foundational principles upon which the nation was founded, that he found lacking in their application to all American equally.

He was not a perfect man. None are. Yet he advanced a commitment to “moral foundations” and “spiritual control” which he saw as critical for society as a whole, and can only be accomplished by each of us dong our part.

I think he would concur with General Douglas MacArthur, a great student of history, who declared, “History fails to record a single precedent in which nations subject to moral decay have not passed into political and economic decline. There has been either a spiritual awakening to overcome the moral lapse, or a progressive deterioration leading to ultimate national disaster.”

Although an icon of the civil rights movement, Martin Luther King was not single-dimensional. He called upon all citizens, regardless of ethnicity, religious convictions, or socio-economic status, to do their part for the benefit of society and the country. It’s wholly fitting to have a holiday dedicated to his memory and teachings. And the nation would be better off if more effort were expended in adherence to his precepts.