The final word to escape the lips of William Wallace of “Braveheart” fame was “Freedom!” The scene still today sends chills down my spine, and arouses a profound sense of gratitude for the freedoms we have in America, even with their gradual erosion that we’ve witnessed over the past 240 years. Even as William Wallace was willing to give his all for freedom, so likewise Republicans in America are generally committed to the ideological foundation of our republic: life, liberty, and the pursuit of happiness. We implore independent voters to side with the cause of liberty and individual freedom. 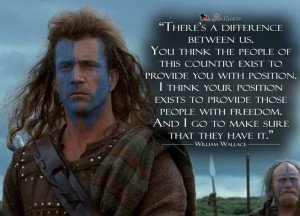 With that said, the Republican Party is no more monolithic than the Democrat Party is. There are elements within both parties that are more or less conservative or progressive. Those of us who are more conservative align ourselves ideologically with the classical liberals of the 18th century who founded this nation, again based on the Lockean Creed and embedded in our founding documents. These are the principles that have made America unique, and it is our conviction that this legacy must be perpetuated for the republic and American exceptionalism to survive.

As classical liberals, we acknowledge that the more government grows and encroaches into our individual lives, the more our individual freedom and liberty is diminished. It was this principle that Benjamin Franklin referred to when he stated, “Those who would sacrifice freedom for security deserve neither.”

While we acknowledge the need for some security as a safety net for some in society, we believe that freedom is ennobling and the ability to achieve or fail develops character and is good for all, individually as well as collectively as a society. Consequently, we resist expansion of government power and incursion into, and control over, our lives. 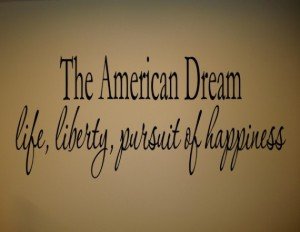 We maintain that the Constitution purposefully delineates the limited powers of government in order to maximize individual freedom and liberty. Consequently, we are supportive of the constitutional functions of government, and logical and progressive levels of taxation in order to support them. We support logical, protective regulation, but reject centralized planning and government intrusion into every aspect of our lives at the expense of our liberty.

We are supportive of rational levels of taxation to pay for the services we demand of government, but acknowledge the factual consequences of diminished return the higher taxes are. And as the former Council of Economic Advisors Chairman Christina Romer has proven, for every $1 collected in taxes, there is a diminution of GDP (Gross Domestic Production) output of $3. Taxes, then, should be kept as low as possible to maximize growth of the economy and provide us individually with maximum financial freedom.

We want the economy to grow, not just for the improvement of our station in life, but because we need more than 120,000 new jobs created each month just to keep pace with population expansion. And more than that is needed to start picking up the gap of those who are underemployed, who, based on the Department of Labor’s U6 report, currently stands at 10%.

This kind of job expansion can only occur with a healthy, thriving private sector, that rather than being demonized by Washington and inflicted with senseless regulation and micromanagement by government bureaucrats, is fostered and facilitated by prudent policy and regulation. Ronald Reagan said, “The best welfare program is a job,” to which we would qualify further, a “good job.”

We adhere to fundamental fiscal principles, that the government should be beholden to the same financial restraints that we as individuals are, and that we shouldn’t spend what we don’t have. We maintain that it’s illogical to presume that spending two times more than you receive in income or revenue is sustainable and that believe that unrestrained spending threatens to bankrupt the nation and raze the republic.

We believe in free market economies, not only because they work, but because they afford the most freedom to hard-working Americans. Government can serve a legitimate role in protection of citizens and their property, but should not have power to micromanage our health care, our energy use, or our commercial activities.

Thomas Jefferson succinctly stated, “A wise and frugal government, which shall leave men free to regulate their own pursuits of industry and improvement, and shall not take from the mouth of labor the bread it has earned – this is the sum of good government.” We hold that to be a self-evident truth.

Right now we have a federal government that is neither wise nor frugal, but to that end we strive for a reversal at the national level, and an improvement in state and local government as well. To effect such change, it is imperative that independents consider not just the personalities of presidential and congressional candidates, but the broad principles at the base of their ideologies.

If the republic is to survive as intended, it will be because a majority of the 39% of independent voters decide that it’s worth saving, and vote accordingly. We would invite a thorough examination of the issues and the candidates, and a resolve to make logical, cogent decisions on how to vote that will facilitate a return to common sense governance, and a resurgence of commitment to the principles upon which the nation was founded. America’s founding principles made her great; she can be so again!

Support Conservative Daily News with a small donation via Paypal or credit card that will go towards supporting the news and commentary you've come to appreciate.
Tags
independent voters saving america