Top News
Home >> Opinion >> Is The Jefferson Memorial and American Flag Next?

Is The Jefferson Memorial and American Flag Next? 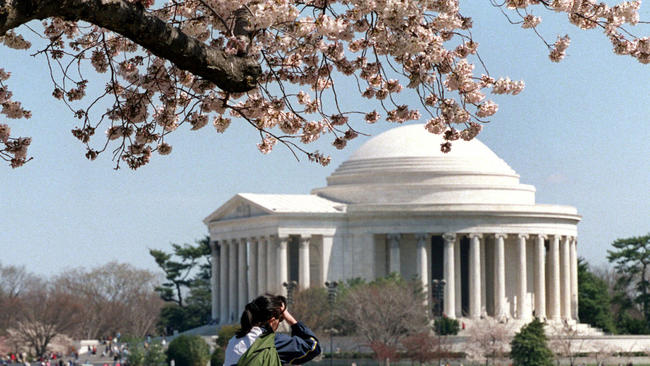 It started with Dylan Roof’s murder of nine people in a church. Since it was South Carolina attention was immediately drawn to the confederate flag that flew over the state house. Governor Nikki Haley agreed to take it down.

Now some are arguing that the Jefferson Memorial in Washington D.C. should be removed because Jefferson owned slaves.

CNN anchor Ashleigh Banfield this week questioned whether the Jefferson Memorial should be taken down because Jefferson owned slaves. “There is a monument to him in the capital city of the United States. No one ever asks for that to come down,” Banfield said.

Fellow anchor Don Lemon responded by saying Jefferson represented “the entire United States, not just the South.” But he added: “There may come a day when we want to rethink Jefferson. I don’t know if we should do that.”

I agree with the blogger  Joseph Watson on the InfoWars site who compared taking down the Jefferson Memorial to the logic of Islamic State terrorists “who have spent the last year tearing down historical statues and monuments because they offend their radical belief system.”

If they want to remove the Jefferson Memorial does this mean we tear down Mount Vernon, Washington’s home in Va. because he owned slaves? Do we tear down  the Washington Monument?

At the University of Texas, Austin, a public statue of Jefferson Davis, the president of the Confederacy, was reportedly vandalized this week with the words “Black Lives Matter” and “Bump the Chumps.” Another Davis statue at the Statehouse in Frankfort, Ky., has come under scrutiny, with some calling for the work of art to be taken down.

Students at the university have started an online petition advocating removal of the statues, saying “it is impossible to reach the full potential of an inclusive and progressive learning institution while putting an idol of our darkest days on a pedestal.” Hey guys I hate to tell you this but has anyone told you that the reason we study history is not to repeat the past mistakes? A knowledge of the past is an aid to the future.

A Confederate monument in Charleston, S.C., was vandalized this week with the words “Black Lives Matter,” according to the Post and Courier newspaper. Black lives matter? Since 2012 6000 blacks have been killed by other blacks

This is really, really getting out of hand now. This is exactly what ISIS is doing in the Mid Eastern countries. Are we like them now?

Black Panther leader Malik Shabaz is calling for “killing of all slave masters.” Dylan Roof said he wanted to start a race war and it looks like he is going to get his wish if this keeps up.

Speaking of Roof, I was perusing his manifesto to find out what makes this guy tick and  do what he did and thru all his rantings and ravings and madness he did make a few  valid points about slavery that isn’t  mentioned much. He mentioned how not all slaves were treated bad as we have been told and there were many instances where slaves cared for and loved their masters. There were also black slave owners too. Here is a passage from his manifesto: Only a fourth to a third of people in the South owned even one slave. Yet every White person is treated as if they had a slave owning ancestor. This applies to in the states where slavery never existed, as well as people whose families immigrated after slavery was abolished.

I have read hundreds of slaves narratives from my state. And almost all of them were positive.

One sticks out in my mind where an old ex-slave recounted how the day his mistress died was one of the saddest days of his life. And in many of these narratives the slaves told of how their masters didn’t even allow whipping on his plantation.

I remember hearing about that myself and in the book Uncle Tom’s Cabin (is that still available anymore?) they portray good slave owners and bad ones like Simon Legree. The term “Uncle Tom” used today comes from there referring to the black slave who was friends with his white master. Walt Disney’s movie “Song of the South” also depicts good slave owners who treated their slaves well. I understand that is not available in the U.S. anymore.

But today people don’t look at things like that. All they see is black and white, rich and poor and what they can get and want everything handed to them. What a pity.

Time to remove Jefferson memorial too?

Hillary to Speak at Event Named After Slave Owners…

FARRAKHAN: ‘WE NEED TO PUT THE AMERICAN FLAG DOWN’…

Authors may need to change covers…

Many memorials to Confederates, other slave holders: What happens to them?