It’s In The Genes
Mr. Karger seems to have inherited his mother’s genes, as she was an active volunteer within the community.

Political Career
1977 to 2004- Executive Vice President and Chief Financial Officer with the political campaign consulting firm Dolphin Group
He has worked on 9 presidential campaigns, including serving as a senior consultant on the campaigns of Presidents Reagan, George H.W. Bush and Gerald Ford.
March 23, 2011- Officially announced his candidacy for President 2012

Political Organizations
Formed a non-profit organization, Save The Boom, to save a historic gay bar in Laguna Beach California
2008- Formed Californians Against Hate to be a political watchdog group of the major donors and organizations fighting to repeal gay marriage in California through Proposition 8

Boycotts
Through his non-profit organization Californians Against Hate, Mr. Karger published what he calls a “Dishonor Roll” where he calls for a boycott of donors who give more than $5,000 to Proposition 8. There are a total of 4 companies on the boycott list:

I am listing these in this article, and I call for a BUYCOTT for these 4 companies to counteract Mr. Karger’s boycott.

Political Accomplishments
The first openly gay presidential candidate from a major political party in American history
Mr. Karger was the first to announce his candidacy for the Republican nomination for President of the United States on March 23, 2011

Political Affiliation
“Independent Republican”- this is the political affiliation Mr. Karger used when he announced on April 10, 2010 at the Southern Republican Leadership Conference that he was “seriously considering becoming a candidate for President of the United States in 2012”
Mr. Krager has defined himself as the “Anti-Romney” candidate, and appears to have an express goal, in his words, to “run a campaign specifically designed to throw a wrench into Romney’s run”

His Reputation
It comes as no surprise that Mr. Karger does not fit into what is commonly identified as a Republican. Steve Scheffler, a delegate from the Iowa, said that Karger is “part of the radical homosexual community”.

Another term used to describe his candidacy is “a long shot”.

One interviewer actually had the backbone to essentially say the real “question on the minds of many is does he think he has a snowball’s chance?” Then the interviewer went on to say, “The answer to that is, yes and no.”

On The Issues
Abortion– Roe v. Wade is the law of the land
If I were remotely leaning towards voting for Mr. Karger this issue alone would knock him out of the running for me. As I stated in another candidate profile, this is one thing I cannot compromise on. If you have read any of my articles regarding mine and my husband’s journey to have a family you will understand why this is an absolute for me. I cannot and will not budge on this issue- ever! Life begins at conception. I cannot vote for someone who believes a woman has a right to choose whether or not she carries life or kills life.

American Spirit– Optimism and getting along
Immigration– Let’s Take Action Now
Energy Independence– We must end our dependence on foreign oil
Education– We need to transform education in this country
Jobs and Economy– Jobs First: We need to keep jobs in America
Marijuana– We should move to legalize and tax marijuana
Foreign Policy– Defense, Development and Diplomacy
Iraq and Afghanistan Wars– Surge out of both countries
Middle East and Israel– Strong American leadership to help bring a lasting peace in the Middle East
Supports Israel– Mr. Karger has stated that his record on issues relating to Israel are comparable with that of Menachim Begin, the former Israeli prime minister and founder of the Likud Party.

In his words, quoting from his official campaign website:

LESBIAN, GAY, BISEXUAL, TRANSGENDER AND QUEER RIGHTS
I am the only candidate for president who supports full equality for all Americans

28th Amendment Proposal
Mr. Karger has proposed a 28th Amendment be added to the United States Constitution that would allow 16 and 17-year-olds the right to vote. His opinion is that this would encourage younger people to participate in the political process. In his words, from his official campaign website:

“I want to empower our youth”

In an interview with the Huffington Post on February 8, 2011 Mr. Karger states:

“I feel that we should immediately begin discussion and planning to lower the legal voting age in the United States to either 16 or 17 years old.”

“We should then encourage our schools and school districts to teach these young people about elections and the campaigns on the local, state and national level while they are happening.”

I had to catch myself when I was writing this, because I almost dropped my computer I was laughing so hard! Is this man serious? We have seen too many “Man On The Street” interviews where people much older than 16 and 17-years-old have absolutely no clue who Joe Biden is, much less someone like Nancy Pelosi, John Boehner, or anyone less “recognizable” than the aforementioned people. Oh, everyone recognized Barack Obama- the lame-stream media made sure that the entire world knew him.

Mr. Karger states that we should encourage our schools and school districts to teach them about elections. Are you kidding me? The schools have indoctrinated our children too much as it is, politically! In the 2008 election cycle not one of my children knew who Joe Biden was. Oh, yes, they knew Barack Obama alright! In the infamous words of Sarah Palin, “you betcha” my husband and I informed them of the entire process, who was running and what they stood for. In their classroom elections all but one of my children voted for Barack Obama. This is after us talking on numerous occasions as a family about what we stand for and what is important to us. The power of suggestion and peer pressure is too great to entrust our future to children!

In a day and age when you talk about “The Situation”, people automatically assume you are talking about a a Reality TV show rather than the situation our country is in I think the last thing in the world we need is to have “Generation Me” voting at a younger age! The majority of 18-year-olds are uneducated politically- why add two more years of uneducated votes to the system?

Warped Priorities
At the risk of skewing the readers view of Mr. Karger, I am adding a personal heading rather than a “factual” heading to this section.

Mr. Karger has said that his candidacy for the presidency is not so much about winning but rather getting the LDS Church to end its political campaign against same-sex marriage.

Laying aside everything that I disagree politically with Mr. Karger on, to know that the express goal of a person running for the office of leader of the free world is to stop a religious organization from being involved in the political process to have their voice and opinion does not sit well with me. It is quite obvious to me that Mr. Karger is not a conservative. Why he is running on the “Republican” ticket I do not know.

I want a leader who has the best interest of this nation at heart rather than the numerous leaders who have a selfish agenda for running for office. Trying to “hush up and shut down” a religious organization from speaking out against the leftist agenda is not an admirable trait to say the least- especially for a candidate running on the “conservative” ticket.

Mr. Karger’s priorities seem to be very warped, to say the least. 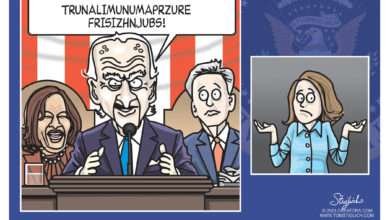