COLD-blooded murder and assassinations, the bombing of a country that attacked no one, and the U.S. participation in three wars that have no defined mission. Is this what Democracy looks like ? Americans seem to have severe cases of selective memory loss when it comes to the very same war crimes that many people have accused George Bush of committing years ago with the invasions of Iraq and Afghanistan. In Iraq, people seem to forget the freedom that was won for the Iraqi people from the murdering dictator Saddam Hussein’s regime that they enjoy today, mainly because of the war in Iraq. They were freed from Hussein’s oppression and brutal dictatorship, yet many people still call this a war crime today.

While leftists around the world and even Republican RINOS in DC today have called the Iraqi war an illegal action, I,d like to point out that we are still there losing brave Soldiers lives. What say you Obama,and your radical Liberal mouthpieces? Where is the cry to pull out of Iraq today? There isn’t one, simply because leftist ideologues are nothing but pathetic hypocrites pushing an anti-American Socialistic agenda, period ! War is only illegal when a Republican is waging it.

How about explaining to the nation how we waged an illegal war on the leader of Libya, all based on your fake cries of Democracy there?  Leftist Democrat Hillary Clinton gave the ragtag radical rebels in Libya 25 million dollars of our tax payers hard earned money, all the time saying it wasn’t for “lethal military equipment.” Well just yesterday the Rebel spokesman was demanding more money to fund the civil war in Libya. We are simply giving aid and comfort to a group of people to topple their government. Of course the leftist propagandists in the media, who get their orders from the Obama regime, seem to have missed this little fact, as there has not been one word written, or one report on TV asking where in the hell did the Libyan Rebels get all the new military equipment from?  Obama and company do not want the American public asking that question. One minute the Libyan Rebels are a ragtag group of 15 – 20 men without uniforms, guns, radios, rockets, etc., and the next thing we see after Hillary gives them 25 million dollars, is that they have all of the afore-mentioned military equipment, including radios, guns, shoulder fired rockets, uniforms, etc. Here is some new information on the illegal funding of the Libyan rebels to promote the overthrow of their government, even though no one knows exactly what kind of government the rebels intend to install if they succeed. Is this what Democracy looks like? From BBC News Africa:

The international contact group on Libya has agreed to create a temporary fund  to assist rebel groups, during talks in Rome.

The rebels’ Transitional National Council says it needs $2bn-$3bn (£1.2bn-£1.8bn) in the coming months for military salaries, food, medicine and
other basic supplies.

Anyone thinking that this money will not be used to buy weapons is in denial of reality here. The propagandists just do not want anyone to be held accountable when it gets proven that NATO and Hillary Clinton in particular, are funding the weapons that will be used to overthrow the Libyan government here. Notice the cutsey name being used for the group funding the rebels now ? ” The International Contact group.” When the U.S. and the U.K, along with NATO are proven to be funding weapons for the rebels, who will be held accountable for it? Nobody, thus the fake “group” mantra being used.  Again, the U.S and the U.K. are funding the rebels to overthrow the government in Libya, as we see again in the above-mentioned BBC article:

British Foreign Secretary William Hague insisted that any financial assistance to the rebels would not be spent on weapons.

Do you mean just like the idiots that “monitored” the pathetic U.N. Oil for Food scandal that you jackasses enabled back in the early 90’s that let Saddam Hussein swindle billions of dollars from you incompetent, Socialist globalists ? Oh yes, we believe you will “monitor all that cash” to make sure it doesn’t buy weapons. It isn’t like your types have been proven to be incompetent buffoons before is it? Oh wait, the Oil for Food thing… 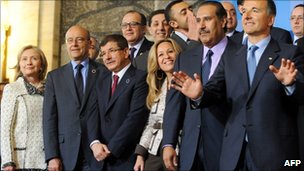 “This [money] will help them to keep basic services going… because in the east of Libya they still need to be educating people, to keep public services
moving and they have to meet the expenses of all that and they don’t have much tax revenue at the moment,” he said.

Just like U.S Liberals, the rebels in Libya have picked a fight that has caused a disruption in their tax revenue, and now the rest of the world is being asked to fund their fight. Ever hear of actions have consequences ? People are now seeing the ignorance of the illegal war in Libya with no stated mission or plan, and now they want others to fix the problems they created. Zero personal responsibility, just like the liberal ideology of the Global Socialists. Is it any wonder the Liberal Nanny-State worshipper Hillary Clinton is right in the middle of this fiasco ? Maybe Hillary and Bill can buy some property in Libya and stay there for the rest of their pathetic lives, instead of continuing to infect America with their Socialistic ideology. One minute it is a war crime to invade another country that hasn’t attacked us, the next it is U.S. policy to have the Secretary of State over there to fund the uprising. Is this what Democracy looks like?  Damn hypocrite fake Democrats disgust me more every day.

In conclusion, we have learned that Libyan President Gaddafi’s son and three grand-kids, all under the age of fourteen were blown to pieces by a NATO bomb. Innocent bystanders murdered in cold blood and no one can be held accountable because they are now hiding under the NATO umbrella. Is this what Obama and Hillary’s Democracy looks like? After all, this is their stated reason for waging an illegal war on Libya. Looks more like murder and war crimes to me.