The Latest News about ISIL 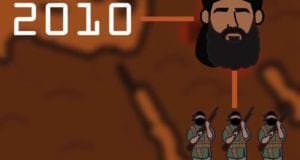 PragerU Explains where ISIS came from, what it is and what it wants. Most of the video is an interesting and informative rewind of what’s happened in the middle-east under Obama’s leadership, but there are several thought-provoking nuggets of wisdom in this instructive video.

END_OF_DOCUMENT_TOKEN_TO_BE_REPLACED

This week President Obama addressed the nation in a rare Oval Office speech. The intent was to assuage concerns that the government isn’t doing enough to protect us from radicalized jihadists, like the couple in San Bernardino last week. But the speech may have raised more questions and apprehensions than provided answers or assurances. And perhaps the largest is in ...

END_OF_DOCUMENT_TOKEN_TO_BE_REPLACED

ISIS claims responsibility for explosion near Italian consulate in Cairo

R. Mitchell July 11, 2015 Comments Off on ISIS claims responsibility for explosion near Italian consulate in Cairo

Islamic State militants are claiming responsibility for a large explosion that rocked the Italian Consulate in Cairo, Egypt early this morning. At about 7am local time, a huge explosion killed one person and injured four others as it ripped the facade off of the consulate building and damaged underground water pipes. Sinai Province, an ISIL affiliate has since claimed responsibility ...

END_OF_DOCUMENT_TOKEN_TO_BE_REPLACED

The Pentagon released gun camera footage from successful attacks on ISIS and Khorasan targets inside of Syria. The first is a training barracks/residential area where fighters-in-training would be housed:   Here’s the complete video of the released airstrikes. Wade through the President’s political spin and catch several successful strikes by our brave military members.

END_OF_DOCUMENT_TOKEN_TO_BE_REPLACED

We seek to come closer to Allah by sacrificing our blood and our lives. ISIS has released its first real propaganda response to President Obama “broad coalition” and repeated threats to contain, degrade, destroy, and otherwise attempt to impede the Islamic State from expanding their self-proclaimed caliphate. Coming in at just under an hour, Flames of War is narrated in ...

END_OF_DOCUMENT_TOKEN_TO_BE_REPLACED

President Obama’s Broad Coalition of One

With great fanfare and a nationwide, prime time presidential address to the American people, President Obama announced the formation of a “broad coalition” that would wage war together to destroy the Islamic State also known as ISIS or ISIL. Although few other details were given about the coalition, a senior administration official said on Wednesday “we are very confident that ...

END_OF_DOCUMENT_TOKEN_TO_BE_REPLACED

Meet Abu Bakr al-Baghdadi: The Leader Of ISIS And The New Caliph Of The Islamic State

David Huntwork September 6, 2014 Comments Off on Meet Abu Bakr al-Baghdadi: The Leader Of ISIS And The New Caliph Of The Islamic State

The Muslim world has been without a Caliph and Commander of the Faithful for ninety years, and now the new fundamentalist Islamic entity in Iraq and Syria known as the Islamic State has put forth a pretender to claim the title. At the age of 43, Abu Bakr al-Baghdadi burst upon the national scene as the operational and political leader ...