If you’re a taxpayer in New York, or anywhere in the U.S., you’re getting scammed by groups like United Way, Catholic Charities and the Central American Refugee Center (CARECEN). You may think they’re charities. Truth is, these groups are hauling in millions in taxpayer dollars — your money — under government contracts to facilitate illegal immigration.

It’s money laundering. Democratic politicians want to maximize illegal immigration, but they don’t want their fingerprints on it. The remedy: pay so-called charities that will do the work for them. Who’s in on this scam? President Joe Biden, and politicians across the country including New York Gov. Kathy Hochul, Washington, D.C., Mayor Muriel Bowser and New York City Mayor Eric Adams.

Even before crossing the border, migrants still in Mexico are being handed payment cards loaded with $400 a month to enable them to pay for necessities. The cards are distributed by the nonprofit International Organization for Migration, thanks to money provided by the State Department.

After crossing and surrendering to U.S. Border Patrol agents, many migrants are directed to Catholic Charities, which provides them with hotel rooms, meals and clothing, and sometimes pays for their bus or plane tickets to their chosen destinations. Sister Norma Pimentel, executive director of Catholic Charities of the Rio Grande Valley, explains that the mission is merely to “give a cup of water in Jesus’ name.”

Who can argue with that? Except that the money isn’t coming from the Sunday collection basket. Sister Pimentel admits her organization is reimbursed by the federal government. It’s coming from taxpayers, who have no clue they’re supporting illegal immigration.

Texans such as Rep. Lance Gooden blame these organizations for “fueling the drastic increases in illegal immigration across our southern border and throughout the country.”

Texas and Arizona are busing migrants to the nation’s capital. Meeting the buses there are staff from CARECEN, a far-left group funded almost entirely by government contracts, and Catholic Charities. These groups hand out gift cards and food packages, direct migrants to shelters or hotel rooms, or help them buy tickets to other destinations. Who pays for all this? FEMA — the Federal Emergency Management Agency, a government agency that funnels money through nonprofits.

FEMA’s Emergency Food and Services Program board includes Catholic Charities and United Way, which pass the money to local nonprofits serving immigrants in the country illegally. FEMA has already provided $2.2 million in humanitarian funding for this purpose in the D.C. area.

On to the New York area, where the Biden administration has been flying in migrants on charter flights in the dead of night. After these flights land, usually at Westchester County Airport in White Plains, migrants get on chartered buses and head off to destinations across the region, including several Catholic Charities facilities.

Catholic Charities and CARECEN are funded largely by government contracts, not private donations, their financial statements reveal. Hochul supports both these organizations through her Office for New Americans.

New York is required to provide shelter to anyone from anywhere who has no other place to sleep. That’s thanks to lawsuits brought by nonprofits such as the Coalition for the Homeless. Who funds the coalition? New York City and New York State. The coalition is a quasi-government actor posing as a charity. It’s the city suing the city. The losers are taxpayers, who foot the bill for the charade.

And Americans already here who need a helping hand, such as Jeffrey Harris, a 56-year-old veteran living in one of the shelters. “If we can’t take care of the homeless here, how can we take immigrants?” he fumed.

Support Conservative Daily News with a small donation via Paypal or credit card that will go towards supporting the news and commentary you've come to appreciate.
Betsy McCaugheyJuly 27, 2022
0
Facebook Twitter Reddit Telegram Share via Email Print 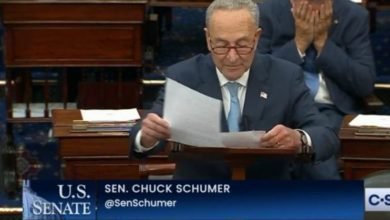