The International Worker’s Day was chosen in 1889 by the Marxist International Socialist Congress, which met in Paris and established the Second International as a successor to the earlier International Workingmen’s Association. They adopted a resolution for a great international demonstration in support of working-class demands for the eight-hour day. The date had been chosen by the American Federation of Labor to continue an earlier campaign for the eight-hour day in the United States. The 1904 Sixth Conference of the Second International, called on “all Social Democratic Party organizations and trade unions of all countries to demonstrate energetically on the First of May for the legal establishment of the eight-hour day, for the class demands of the proletariat, and for universal peace”. “May Day” celebration is anti-religious, secular, Communists Commemoration of labor.  To Lenin and his fellow communists, work was purely materialistic.

To counter the communist view, Pope Pius XII placed before the faithful the example of St. Joseph the Worker, true model of all workers. Unlike the Communists, who viewed work in purely materialistic terms and cut God right out of the equation, St. Joseph’s work had a supremely spiritual dimension  The Feast of Saint Joseph The Worker was  to be held May 1st, the same day that the Communists held their celebration

The Feast of Saint Joseph is dedicated to a holy man who is the patron saint of all forms of labor, unskilled and skilled, and who was the ideal father of the nuclear family.  On this day, the Church invokes all workers to pay reverence to a man who humbly dedicated himself to a professional vocation he enjoyed, and while exhausting, he performed with excellence.

The Church invites us to contemplate Joseph’s economic contribution to the common good: providing tables and chairs for family homes, desks for offices, and other products of his carpentry, such as structural beams for roofs and bridges. While we do not know precisely what St. Joseph produced and sold in his shop, we can imagine that he served the needs of his time, his particular market, and was reasonably successful. After all, the Holy Family had a stable home, with a  breadwinner, and unlike his contemporaries, Jesus was not sent out to provide a second income and beg on the streets for his daily needs. Instead, he apprenticed with St. Joseph to learn a profitable and valuable trade.

What we also know about St. Joseph is, like his beloved Mary, his will was in constant union with God. St Joseph did his work, quite literally, for God. As a carpenter in Nazareth, he worked in order to support the Child Jesus and His Mother Mary. Jesus learned the carpenter’s trade from St. Joseph and worked for the majority of His life as a carpenter Himself. The life of the Holy Family shows us the value, beauty, and sanctity of work

When contemplating and putting into practice Saint Joseph’s example of daily labor, work was not just a job. Not unlike when the Apostles “went on their way from the presence of the Council, rejoicing that they had been considered worthy to suffer shame for His name” Acts 5:41

St. Joseph the Worker is the patron saint of all workers, especially husbands and fathers who get up and go to work every day to support the family they love and cherish. To learn more about St. Joseph, Refer to the Catholic Store 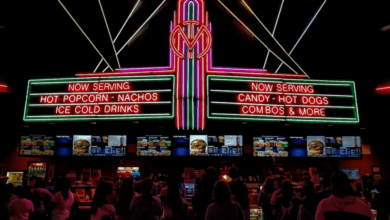 Why We Stopped Going to the Movies