The organizer of an event held by a conservative student group was forced to hide in a closet after the event was disrupted by protesters Wednesday night.

Kelly Neidert, a member of of the Young Conservatives of Texas (YCT) chapter at the University of North Texas (UNT), described being forced to take refuge in a janitorial closet after left-wing protesters forced an early end to an appearance by Jeff Younger, a Republican candidate for a seat in the Texas House of Representatives. Younger’s child, James, was the subject of a custody battle between Younger and his ex-wife, who claimed James was transgender.

“I was forced to hide in a janitor closet with the lights off while antifa searched for me,” Neidert posted on Twitter. The incident was the latest in a series of harassment, which included a petition demanding her expulsion and death threats.

“We were told that me and Jeff were the primary targets” during a briefing from UNT campus police, Neidert told the Daily Caller News Foundation, saying the disruption came from Antifa. Younger also told the DCNF that UNT police mentioned Antifa during a briefing prior to the event.

UNT Anonymous, a left-wing group, posted instructions in a thread on Twitter on Feb. 23, the day the YCT event was originally scheduled. It was postponed due to an ice storm, Neidert told the DCNF.

“Wear a plain mask, preferably black. Wear black non-descript clothing, cover your face and identifiable markings such as tattoos, birthmarks,” the group said in one post.

Wear a plain mask, preferably black. Wear black non-descript clothing, cover your face and identifiable markings such as tattoos, birthmarks. This makes it harder for creeps to single you out and identify you to dox or harass you.

“Do not record or post photos/videos of other protestors that could lead to their identification. Cameras focused on the assholes, not your friends,” another UNT Anonymous post said. “Don’t implicate yourself or others by posting about the event.”

Do not record or post photos/videos of other protestors that could lead to their identification. Cameras focused on the assholes, not your friends. Stay with your friends. Don't act alone. Don't implicate yourself or others by posting about the event.

Younger told the DCNF that UNT campus police asked if he had a personal protection detail prior to the event where he was slated to speak on his agenda as a candidate for the Texas House of Representatives, including banning “transgender child abuse,” “border security” and ensuring “fair elections,” according to his campaign website.

UNT campus police allowed 80 people into the event, but many who entered merely pounded tables and tried to keep Younger from speaking, according to multiple sources.

“A lady stood right next to me, screaming in my ear,” Younger told the DCNF, however a professor “cloaked in the transgender flag” urged the protestors to let Younger speak.

Footage of @kelly_neidert of our chapter being evacuated from our event. The evacuation didn’t work and she was hidden in a janitor’s closet in a nearby building until it was safe to leave. More footage will be posted later. pic.twitter.com/lDv4GG1Vnr

Both Neidert and Younger said that police at UNT had a plan to evacuate them in case of a threat of violence at the event. Roughly 45 minutes into the event, the police decided to execute that plan, Neidert told the DCNF.

Neidert described being separated from Younger during the evacuation and being forced to flee from a crowd of at least 150 people.

Prior to the event, Neidert received numerous threats via direct messages, she told the DCNF. 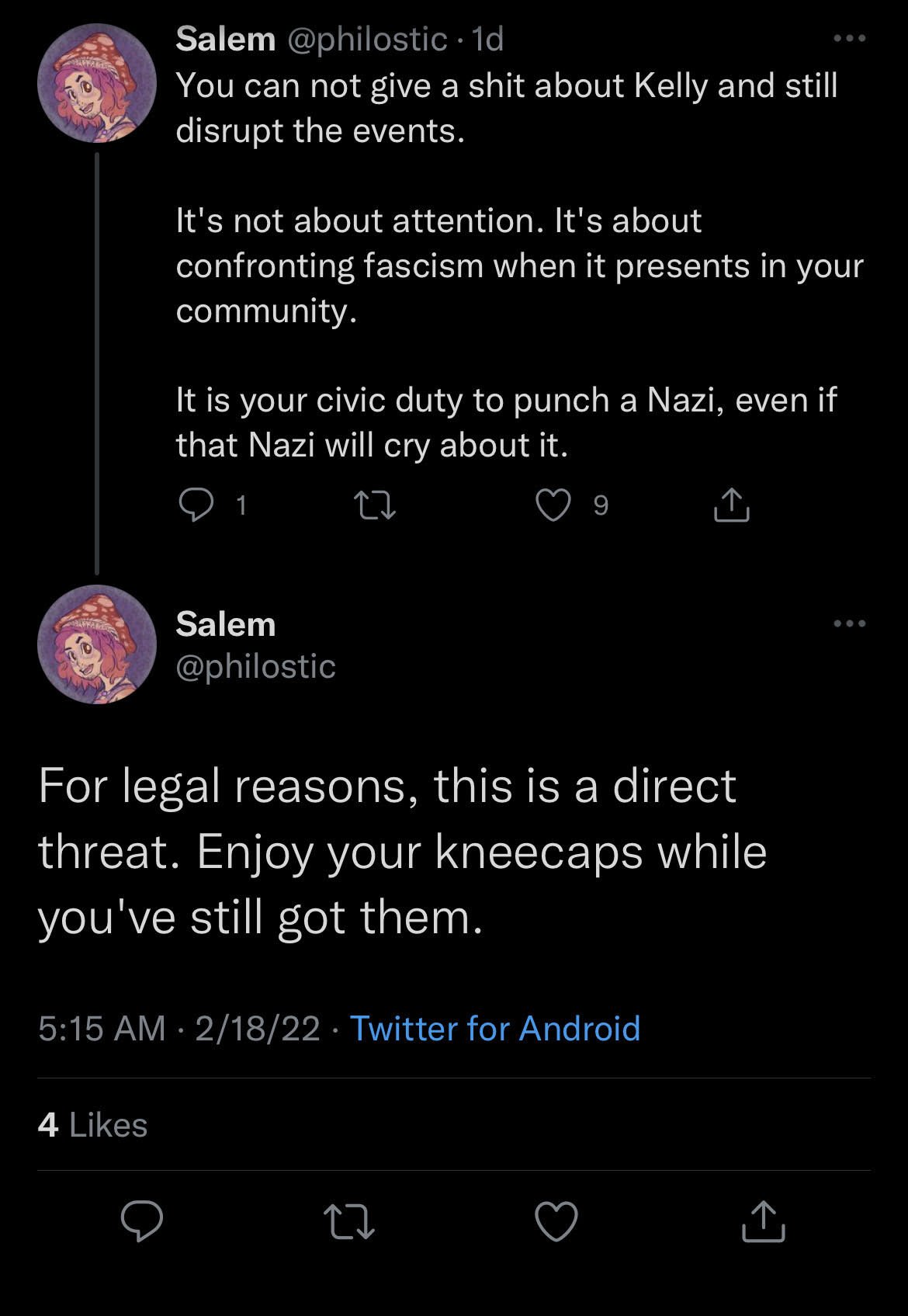 “Enjoy your kneecaps while you’ve still got them,” one threat posted to Twitter read.

Italian dictator Benito Mussolini was executed in 1945, The New York Times reported at the time.

“Murder is ok if they’re transphobic,” another post said, Neidert told the DCNF.

Neither UNT nor the UNT campus police responded to the DCNF’s request for comment.