A person can learn a lot about economics by playing a good game of Monopoly.  Paul Krugman should give it a try sometime.  Even though there is a finite amount of currency, the game can go on for hours.  The same bills keep getting used over and over again in an endless cycle of purchasing property and services (rent).

Our economy does not thrive on the amount of money in circulation.  It thrives on the frequency with which that money circulates.  It doesn’t matter how much money there is.  It matters how much it moves.  Movement equals purchasing.  When the movement accelerates, the economy grows.

We can use a simple transaction between two people to illustrate the principle.  Gus goes to Flo’s diner and pays for his lunch with a crisp new 10-dollar bill.  The next day, Flo gives that same bill to Gus for delivering produce to the diner.  That same 10-dollar bill has now paid for both a meal and food delivery.  If the two of them repeat the ritual every week for a year, that 10-spot won’t be crisp anymore, but it will have paid for 52 meals and food deliveries.  If they repeated the ritual daily, it would have paid for 365 meals and deliveries.  What a deal!  In this scenario, there is only one 10-dollar bill in circulation.  But it circulates with gusto — and employs two people.

The faster the money changes hands, the more vibrant the economy becomes.  If buying and selling accelerate, the economy grows.

Government taxation also affects the economy.  Let’s say Gus has his customary lunch and pays for it with his 10-spot.  But then Uncle Sam pops up from behind the counter and confiscates 3 bucks from Flo to pay for income taxes, sales taxes, property taxes, fuel taxes, and licensing fees.  Now Flo needs to work an extra couple of days to save enough to pay Gus for the next delivery.

Eventually, Flo saves enough and Gus makes a delivery.  But then Uncle Sam shows up again to “wet his beak” and takes the government’s 3-dollar cut from Gus as well.  Now Gus needs to work an extra couple of days before he can buy lunch.  Taxation has slowed the economy.  The currency in circulation buys less product over the course of a year because it changes hands less frequently.

In fact, every dollar that the government takes from taxpayers causes the economy to slow.  So why are we told that government spending stimulates the economy?  Every time we experience a recession or an employment shortage, the politicians assure us that a little “stimulus” spending will fix it right up.  Uncle Sam will just send us some “free” money to spend so we can charge the economy right up again.

Except, there is nothing “free” about anything the government gives us because it has to be taken from us first.

The government only has a few ways to acquire that “free” money with which to stimulate us.  It can tax us — picking our pocket directly.  It can borrow it — sticking us with the interest payments, forever.  It can print it — triggering inflation and lowering our purchasing power.  Or it can sell stuff like oil or timber reserves.  Of course, anything it sells, we’ve already paid for.  My dad was right.  There are no free lunches — not in Flo’s diner, and definitely not when the government “gives” us stuff.

Monopoly does have a critical flaw.  It only has a bank — selling properties.  It doesn’t have a government taxing the property owners.  What taxes the game does collect are collected by the bank, and paid back to the players as interest ($200 for passing go).  How would the game change if we introduced government taxation?  Let’s change the name of the “Go” box on the board to the “April 15” box.  Each time we pass “April 15,” instead of getting interest from the bank, we get a 1099 form and have to pay the government $200 in taxes.  Luckily, our government is a benevolent entity.  It generously gives us $100 in stimulus every time we pass the “Free Parking” box.  How would that change the game?  It would end the game much more quickly, with a lot less property purchased.  Taxation will have throttled the board game economy, not stimulated it — even after receiving a “stimulus.”

I’m going to get a lot of angry emails from government employees explaining that our taxes pay for vital services — which they provide.  They will point out that they are not only government employees, but are also consumers — using their paychecks to stimulate the economy.  That argument is bunk.

Let’s say Flo can serve 100 meals in a given workday.  The government takes the equivalent of 30 meals of income from her.  Is it at all helpful to Flo that government employees come in and buy some of her daily work output?  She’s still got only 70 meals of income for 100 meals of work.  The taxation is worthwhile only if she is getting something in return for her taxes.  Police protection from thieves — the non-government type — is probably worth a few bucks.  The same with keeping the roads repaired.

The reality is that the government does a lot of stuff that isn’t valued by the taxpayers.  As a thought exercise, why don’t we let taxpayers voluntarily pay for what they want — like a normal commercial transaction?  They can select from an à la carte list of services — just like selecting from the menu at Flo’s.

I’d gladly pay for a little security from the DoD.  It’s a really dangerous world out there.  I’d like my selection with extra toxic masculinity and hold the social justice.

I’d also like a side order of the State Department.  We’re part of a global world.  We need to have good relations with our neighbors.

I’ll pass on a serving from the National Institutes of Health.  I just don’t see a lot of value in funding China to create a virus to unleash on the world.

I’ll pass on anything from the Department of Justice as well.  It mostly services the Democrat party.  Let the DNC pay for it.

If the government were to do that experiment, it would find that it takes a lot of money from taxpayers, to do things the public doesn’t want.  Do federal employees really stimulate the economy with their spending?  They’re only spending money that was forcibly taken from others, and then largely spent on nonsense.  Given that much of what they do isn’t value-adding, it stimulates the economy about the same way “mostly peaceful” youths do when they conduct a smash-and-grab at the local department store.  It’s more redistribution than stimulation, and not what a healthy economy needs.  The only way for the government to actually stimulate the economy is to cut taxes and get out of the way of business.

Photo by Karolina Grabowska from Pexels 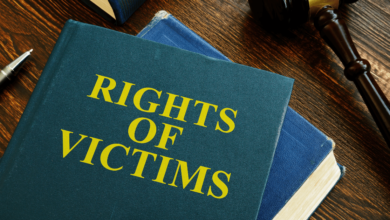 Victims Rights Are No Longer a Concern

A Little Tale About Corporate Life In America Today