During President Biden’s speech at the beginning of his recent press conference, he said a number of things that were untrue, and he set policies that will not solve the problems. He tried to emphasize the positives by creating disingenuous misperceptions.

Biden said that he created more than 6 million new jobs during his first year in office. Since the total number of employed people is about 3.5 million less than before the pandemic, the 6 million jobs were people going back to work.

In other words, in total, there were really no “new’ jobs created. 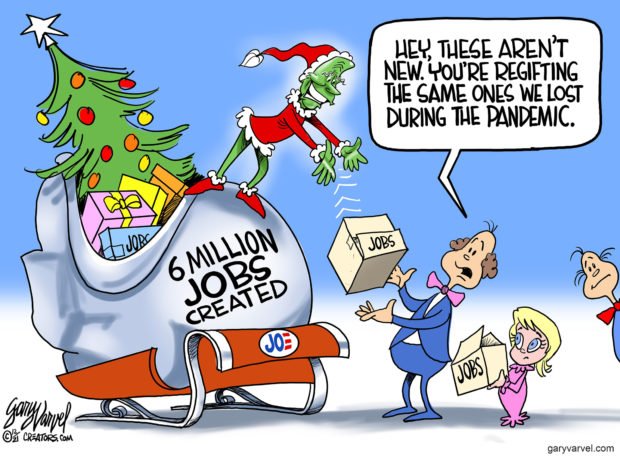 Then he spoke about the legislation he signed into law. He said that the $1.9 billion stimulus package he passed provided relief for millions of Americans. The law gave up to $1,400 of free money to nearly every household and added $300 per week of free money to every unemployed worker’s weekly benefit.

Since the economy was growing at a 6.4% growth rate at the time of signing, this stimulus added nothing to growth but added more excess demand to the economy. Following the spending of that money growth in the last half of 2020 slowed to about 4% and inflation soared to 7%.

Point one will be to end the supply chain disruptions. He says that he already solved most of the problem noting that, by last Fall, shelves were 89% full. That’s just a couple of percentage points below the 91% full seen prior to the pandemic. Yet inflation soared in the fourth quarter of last year. Hence, #BareShelvesBiden is trending on Twitter.

Since last July, the U.S. economy has been producing more goods and services than before the pandemic. That means, while there may be some shortages in specific markets, overall supply is not the problem The inflation problem is caused by excess demand made worse by Biden passing the $1.9 trillion stimulus package and the $1.2 trillion infrastructure package.

Point two, Biden says he is lowering the cost of childcare and healthcare. That is not exactly accurate, either. Healthcare costs and daycare costs are not going down.

Since the cost of these services is rising mostly because of wage increases, the difference between the lower cost paid by the user and the actual cost of the service will be paid by taxpayers. Most taxpayers don’t use daycare and most pay for their own healthcare.

He says to further lower these costs, Congress should pass his Build Back Better plan. Increasing government deficit spending when there is already excess demand in the economy will cause more inflation not less.

Biden cites the meatpacking industry where four firms control almost 85% of the market. Biden says those firms squeezed out smaller firms. He is right about that, but the result is better for consumers.

An oligopolistic market is where the top four firms control at least 70% of the market. If we examine these markets historically, we usually find that the market had originally been purely competitive. However, over time, the market matured and found it is best served by a few very efficient firms rather than a large number of relatively inefficient ones.

For instance, look at the market for the retail sales of groceries. In the early 1900s, most Americans bought groceries from a corner grocery store. That meant there were thousands of small, relatively inefficient, grocery stores nationwide.

It also meant that prices were high as the merchants needed to earn sufficient profit by placing high markups on the small number of goods they sold.

Then retailers discovered if they expanded their product line and increased their sales volume, they could earn sufficient profits by charging lower prices but selling much higher quantities.

In the meatpacking industry, the market has matured. An examination of the four large producers would show that they are mature businesses, and part of their growth was a result of mergers and acquisitions, which is typical as markets mature.

He needs a better set of policies if he really wants to set the economy straight.

Support Conservative Daily News with a small donation via Paypal or credit card that will go towards supporting the news and commentary you've come to appreciate.
Tags
U.S. Economy