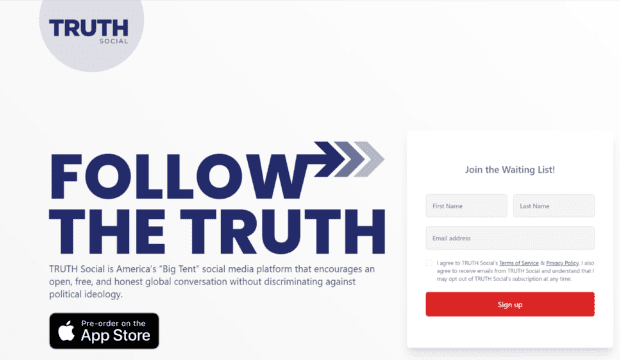 On Wednesday evening, Donald Trump announced the Trump Media & Technology Group was formed through a merger with Digital World Acquisition Corp. The resulting company would place Trump at the helm of a $1.7 billion media organization.

With the announcement, Trump Media & Technology Group (TMTG) will launch “TRUTH Social.” The app is available on the Apple store for pre-order and will begin beta testing in November. A nationwide rollout is expected in early 2022.

TMTG will continue to focus on other ways to compete with big tech outlets and give voices to those that big tech is attempting to silence.

BREAKING: @DonaldJTrumpJr on the announcement of https://t.co/I4K8Tz54NM

Truth Social is “a Big Tent, an open and Free Network for people to be able to communicate, to exercise your First Amendment rights.” pic.twitter.com/Kbq8fdmeN0

Dem Senator Tells Taxpayers Not To Worry About IRS Expansion

Meet The DeSantis Spokeswoman Who’s Putting The Media On Defense