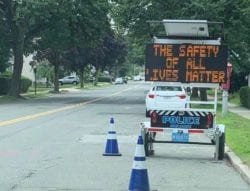 Currently our democracy, our country, our way of life, all we believe and all we stand for are under attack. It is a killer unlike anything you have ever seen before. It comes in for the attack when you least expect it.

Seeing all the assaults on President Trump, from the day he took office, should be enough to make you question why they are trying so hard to remove him. Why are they trying so hard to discredit him, to slander him and even willing to commit criminal acts themselves just to remove him?  No President, in the history of this country, has been under attack the way President Trump has been/is. Think about that. We have never been subject to this much lawlessness and blatant disregard for humanity, our history and for police officers the we have seen in recent months. Law and order is what you are voting on this coming election and the push for mail in ballots are just another democratic scheme to defraud the election.

Make no mistake mail in ballots are not the same as absentee ballots. You should know the difference and why one would be more susceptible to fraud then the other. But that is not what this article is about. This is about law and order, racism, discrimination and a failing society led by leftist radicals.

With the cries to defund the police the general public was told, “We won’t defund them literally” rather we will reorganize etc.  The truth is they are defunding the police and  law enforcement officers, nation wide, have been under attack for months now with no help and no support. The states and cities run by democrats have unprecedented increases in violent crimes.  While you are afraid to go outside or fear you will be attacked, they, the democrats, are quite safe in their mansions with their taxpayer paid security teams. President Trump said,

“We have one city, two cities in particular, worse than Honduras, worse than Afghanistan. These are cities within the United States, Democrat-run. Radical left-run. You see what’s going on in Seattle. Seattle of all places, who would even think that’s possible,” he said, adding:

The Democrats want to weaken very substantially our law enforcement, our police. Frankly, they want to defund [police departments], at least largely. Some want to defund and abolish our police. If nothing happens with [police reform], it’s one of those things. We had different philosophies. They want open borders. They want sanctuary cities. We don’t.”

At the end of this article is a list of the most crime ridden cities and their Democratic mayors. It doesn’t include the Democrat governors and district attorneys who are allowing the crime to grow exponentially. The constituents of these politicians are living in fear, they are attacked, injured, murdered, their business destroyed and literally held hostage by marxists groups and the politicians. BLM and Antifa show up at private residences making demands, often times getting and publishing the private information of individuals from the politicians.

Police officers are retiring or quitting as a result of the abuse and lack of support they receive in the cities and states run by Democrats. As more and more Police officers resign or quit their jobs homicide rates and other crimes soar.  Seattle’s first Black Police Chief resigns, two hundred officers have resigned or quit in Colorado.  In New York police officers are resigning or quitting in vast numbers, same story in Milwaukee, Atlanta, Chicago, Seattle, Minneapolis, Detroit, Philadelphia, Fort Worth, Dallas and the list continues to grow.

As the defund/remove the police effort continues to move forward hate crimes, discrimination, racism and attacks against white people are also growing nation wide.  Democrat & Republican politicians along with the mainstream media all sit back and remain silent. If a white person or anyone of color speaks up or tries to defend themself they are immediately silenced; they are called racists, white supremacists, Karen, white privilege, and so on. This has been going on for decades under the disguise of “tolerance” and we all sat back and did nothing.

Houston, December 30, 2018 7 year old Jazmine Barnes was gunned down in her car while driving to Walmart with her mom and sister.  Jazmine’s mother and 15 year old sister told police a white man with blue eyes pulled up to the families car and opened fire, killing the 7 year old.  The case drew immediate attention and hate crime allegations spread like wild fire. Based on the description the family gave the Harris County Sheriff’s Department issued a composite sketch.  Anti-cop activist Shaun King immediately offered a reward and sent out a Tweet to his 1.1million followers on twitter which included a mugshot of Robert Paul Contrell who looks similar to the sketch. King tweeted and later removed,

URGENT. ALL HANDS ON DECK. A 40 y/o white man w/ a beard in a red pickup truck pulled up on 7 y/o Jazmine Barnes and her family near a Houston @Walmartand shot and killed her and injured others.  We’ve had 20 people call or email us and say he is a racist, violent (expletive) and always has been. Just tell me everything you know.

Robert Paul Cantrell, 49, was arrested and wrongly accused was found by guards hanging in his Montgomery County Jail cell about 4:20 a.m. on July 23, 2019. He was declared dead on scene.” Cantrell was white with blue eyes and was almost immediately arrested.

The two men who actually killed 7 year old Jazmine where both black, Eric Black Jr and Larry D. Woodruffe who were later charged with capital murder.

The family of Cantrell continued to get death treats as the result of his mugshot being circulated on social media. “In one Facebook message to Cantrell’s niece, Hailey, an online commenter wrote, “Someone is going to rape, torture and murder the women and children in your family.”

More recently 5 year old Cannon Hinnant from Atlanta, GA was shot and killed by a black man right in his front yard.  The man walked up to Cannon put a gun to the back of his head and killed him while his siblings watched. Black Supremacists continue to voice their plans to attack white people or demand reparations from them. They show up in white neighborhoods or parks. They attack white people just walking down the street. (See the video of black man pushing old woman in NY).

Look at the recent video of  the white truck driver beaten unconscious by Antifa/BLM in Portland. On and on it goes. February 2017: BLM leader Yusra Khogali says “Whites are sub-Human; should be ‘wiped out’.  She has posted on her Facebook page: “whites are “sub-human.“Whiteness is not humxness, in fact, white skin is sub-humxn,” she wrote. “All phenotypes exist within the black family and white ppl are a genetic defect of blackness.”  Racism against white people is everywhere, it has been going on for decades, but where is the outrage? Where is the cry for justice?  Where is the indignation for the continual racism against white men, women and children?

Grade schools, universities, accompanied by so many of the hypocrites in Corporate American along with professional sports have all surrendered to the racism against anyone white. They all choose incorporating racist, discriminatory anti -white propaganda into education, employee training, and in sports. They are vocal and they don’t care who’s listening. Black supremacist’s are out of control as they wage their attacks on caucasians, law enforcement officers and even some black people and yet they continue unscathed.

Politicians sit on the sidelines refusing to stop the violence, the racism, and ostensibly enjoy the division they are creating. They refuse to support the police and bring law and order to their communities. One has to wonder, “Are democrats intentionally trying to cause a civil war?”

The rhetoric and hypocrisy of the Democratic Party is blatantly obvious, one just has to look at all the actors who spoke at the DNC the past few nights. Was that a comedy or a drama; well, that depends on who was speaking, nevertheless the majority of it was fiction. While you worry about the current state of affairs, the rise in crime, growing racism against white people, the economy, the virus, etc. they were hiding in the safety of their mansions with no plans of discussing any real issues or their real intent. The DNC contained no serious content; God forbid they actually speak about anything worthwhile.

They believe they are smart and you are dumb, therefore, they need to control every aspect of your life including what you are allowed to think. They condone the words and actions of BLM and Antifa who are both anti- American terrorist groups, while ignoring your pleas for help.They want to inflict shame, fear, control, and power over the masses. They are doing things like defunding/removing/not supporting the police without the support of the people who put them in office. They are literally ignoring you, their boss, while implementing their own agenda.

Just a reminder: Yes, some changes need to be made in law enforcement and some officers do bad things, but the majority just do the job they were hired to do. Without law enforcement there is chaos, as they continue to leave their positions, hysteria spreads and so does crime, especially violent crime.

The people you voted for are abusing their power, their office, their position, and you, the ones who put them in office in the first place. They are allowing cities, statues, businesses to be destroyed while not prosecuting the criminals. They are anti American, anti Capitalist, anti police. They are silencing anyone of European, white descent.  They are Racist. They are putting anti-white propaganda into education; yes they are brainwashing your children and turning them into activists.

The Democratic Party you think you know from the past doesn’t exist anymore, you must see it, they took a left turn and never came back. If you live in America and want freedom, law and order and a thriving economy then its time to wake up and realize ALL LIVES MATTER and take your country back from these radicals. White lives matter too.

Here is the Neighborhood Scout ranking of the most crime-ridden cities and their mayors. This does not include: Seattle, Portland, Buffalo, Milwaukee, Atlanta, Chicago, Minneapolis, Kansas, Phoenix, Denver, Philadelphia, Fort Worth, Dallas and other cites under siege. [1]

Support Conservative Daily News with a small donation via Paypal or credit card that will go towards supporting the news and commentary you've come to appreciate.
Tags
2020 Election News all lives matter Democrats law and order Racist The BLM