While everyone is busy with all the mayhem throughout the country along with all the misinformation regarding Covid-19, there is news on the Epstein case.

As you probably already know Jeff Epstein’s autopsy suggests his death was not a suicide.

First and foremost, an inmate would not have a pen as is shown in the video. Also, an inmate would not have a sleep apnea machine in his cell. Suicide watch means you are not alone and you are constantly watched. The whole purpose of “suicide watch” is to ensure the individual doesn’t commit suicide. Jefferey Epstein is gone but the evidence he had is very much alive.

Ghislaine Maxwell, 58, was arrested on July 2, 2020, in by the FBI in her mansion in Bradford, NH. Maxwell allegedly recruited underage girls, won their trust and then turned them over to Jeffery Epstein who abused them at his properties in New York City, New Mexico, and the U.S. Virgin Islands.

Court filings show that Maxwell hired former US attorney Christian Everdell. Everdell and his team were awarded the True American Hero Award for the prosecution of the Sinaloa Cartel head, Joaquin “El Chapo” Guzman in 2019. Mr. Everdell will try to get Maxwell to turn over high profile names in exchange for a more lenient sentence.

Cameron Lindsay served as warden at the Metropolitan Detention Center for years.  He believes Maxwell should be placed on suicide watch since there is no hope for her to escape prison time. Lindsay said, “She allegedly knows a great deal of information about a multitude of potential co-defendants in the actions against Jefferey Epstein. This is just such a sensitive case, it’s absolutely imperative that the government get it right. Why take any chances? Just put her on suicide watch and keep her there until she’s out the door. I would just not risk it.”

The warden and the chief psychologist have the discretion to put an inmate on suicide watch. If the inmate is put on suicide watch, as was the case with Jeffery Epstein, someone sits outside their cell and monitors them nonstop to ensure they don’t kill themself.

Maxwell is facing charges of sex trafficking, perjury and other offenses where she is facing up to 35 years in prison if convicted. 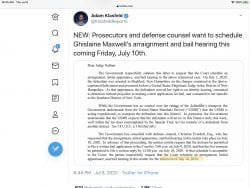 Support Conservative Daily News with a small donation via Paypal or credit card that will go towards supporting the news and commentary you've come to appreciate.
Tags
abuse Christian Everdell Ghislaine Maxwell