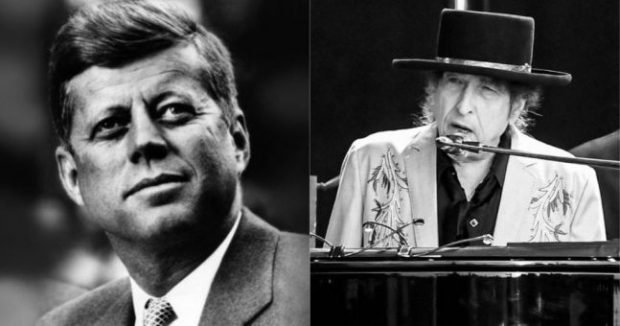 Folk-Rock singer Bob Dylan has always been an enigmatic, reclusive, yet top influence of a generation in the world of folk and rock music. With a whiney, grainy voice or as singer David Bowie once described it, “a voice like sand and glue,” he literally gave birth to an entire generation and civil rights movement with songs like “Blowin’ in the wind” and “The times they are a changin’.” Throughout his life his positions on things have always changed baffling his critics and fans. As Irish Folk singer Tom Pacheco once said “Always changing horses but never changing streams.” Now at 79 years old and some 50 years later Bob takes on the JFK assassination with “Murder Most Foul.”

Dylan asserts how America has been in steady decline since the killing of JFK. In a wide-ranging track, Dylan goes on to name-check the Beatles, Stevie Nicks, Woodstock Festival, The Eagles, and Charlie Parker.

Murder Most Foul is not so much a song, but a 17-minute narrative poem set to music by just a piano and viola. It’s a very gripping, haunting, and somber description of the JKF assassination in Dallas in 1963. Bob’s voice is more of a softer bass type voice as he describes the assassination of JFK in Dallas in 1963 and goes on to describe many aspects of the 60’s generation that followed with events and songs of the time. “It was a dark day in Dallas ’63. A day that will live in infamy….They blew off his head while still in the car…The day they blew out the brains of the king. Thousands were watching no one saw a thing. It happened so quickly by surprise. Right there in front of everyone’s eyes.”

After going into details of the assassination Dylan switches over to the events that followed with “Hush little children you’ll understand, the Beatles are coming they’re going to hold your hand…and later “I’m going to Woodstock it’s the Aquarian Age, then I’m going to Altamont to sit by the stage”. This describes the two major events of the 60’s. Woodstock was the huge 500,000 persons three-day concert where every top act at the time played and was rumored Dylan was going to show which he never did and Altamont was the exact opposite. A live concert in Altamont, Calif. by the Rolling Stones who hired Hell’s Angels bikers as bodyguards and a person was murdered by one of them in front of the stage.

Murder Most Foul reminds me of a darker version of American Pie with describing events from the 60’s generation based on a super tragedy from that time. The assassination changed everything.  One has to listen to this several times to let it all sink in, to fully grasp the genius, power and emotion of this song. In 17 minutes Dylan wrapped our entire history into the event that, sadly, helped define it: Murder most foul of the most inspiring President this country has had in our lifetime.

In 2016 Dylan received the Nobel Prize in literature from Obama. You can hear the song here:

Support Conservative Daily News with a small donation via Paypal or credit card that will go towards supporting the news and commentary you've come to appreciate.
Tags
Bob Dylan John F. Kennedy