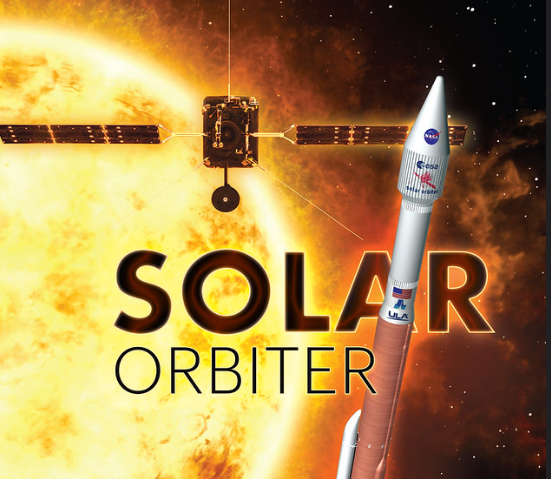 Cape Canaveral Air Force Station, Fla., (Feb. 7, 2020) – A United Launch Alliance (ULA) Atlas V rocket is in final preparations to launch the Solar Orbiter mission, an international cooperative mission between the European Space Agency (ESA) and NASA. The launch is on track for Feb. 9 at Space Launch Complex-41 from Cape Canaveral Air Force Station. Launch is planned for 11:03 p.m. EST at the opening of a two-hour launch window. The live launch broadcast begins at 10:30 p.m. EST on NASA TV at and www.ulalaunch.com.

Solar Orbiter will leave the launch pad atop 1.2 million pounds of thrust from the Atlas V main engine and single solid rocket booster (SRB). The SRB will burn for about 90 seconds while the first stage engine will burn for four minutes. Two burns by the Centaur upper stage achieve escape velocity, propelling Solar Orbiter to 27,000 mph for deployment less than an hour after liftoff.The Atlas V 411 rocket, a unique configuration that includes just one solid rocket booster, provides the optimal performance to precisely deliver a range of mission types. In its nearly 14 years of service, the 411 rocket has completed five flights, including NASA’s OSIRIS-REx mission. With a distinctive appearance, the Atlas V 411 is tailored to the performance needed to achieve the Earth departure trajectory for making repeated close encounters to the sun. This configuration first launched on April 20, 2006.

“We are proud to launch Solar Orbiter in support of our NASA and international mission partners,” said Gary Wentz, ULA vice president of Government and Commercial Programs. “This exciting mission will allow us to further explore our universe and understand the intricacies of the sun.”

This Atlas V 411 configuration vehicle includes a 4-meter large payload fairing (PLF) and stands 189 ft. tall. The Atlas booster for this mission is powered by the RD AMROSS RD-180 engine. Aerojet Rocketdyne provided the one AJ-60A SRB and RL10A-4-2 engine for the Centaur upper stage. NASA’s Launch Services Program at the agency’s Kennedy Space Center in Florida selected ULA’s proven Atlas V vehicle for this mission and is responsible for management and oversight of the Atlas V launch services.