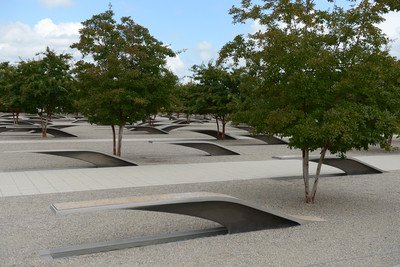 The traumatic events of Sept. 11, 2001, changed the lives of everyone in America, especially those working for the Defense Department. Terrorists proved that the very symbol of our national security — the Pentagon — was not, in fact, impenetrable.

A hijacker flew American Airlines Flight 77 into the southwest corner of the Pentagon that day, killing 184 people — all on board the plane and many more inside the building, which was heavily damaged.

The Pentagon has since rebuilt, and an important addition to the grounds is the National 9/11 Pentagon Memorial honoring those who were lost. It was dedicated on Sept. 11, 2008 — seven years to the day after the attacks.

The Meaning Behind the Design

The $22 million memorial sits on two acres of land right outside where the jetliner struck. Dozens of crape myrtle trees surround the serene landscape. There are 184 memorial benches dedicated to each of the victims, and they’re organized in a timeline of their ages, from the youngest victim, 3-year-old Dana Falkenberg, to the oldest, 71-year-old John Yamnicky.

The site also has a curved wall, aptly dubbed the Age Wall, which gets higher in height to represent the ages of the victims, meaning it starts at 3 inches tall to represent Falkenberg and grows to 71 inches to represent Yamnicky.

Are there Tours of the Memorial?

While there are no official guided tours, there are guides on the grounds to give out information, and there is a 24-minute audio tour that’s available for download. You can also call 202-741-1004 at the memorial entrance and listen to the tour that way. The audio provides a sequential narrative of the events at the Pentagon on Sept. 11, 2001. It also explains the purpose of the memorial’s design and the building’s history.

There’s a Memorial Chapel Inside, Too

The Pentagon Memorial Chapel was built within a year and dedicated on the first anniversary of the attacks. The point of impact of Flight 77 had become a place where the Pentagon community left flowers and mourned the victims, so senior leaders decided that instead of rebuilding that area as office space, it would become a chapel for all faiths to worship and pray.

The chapel is open 24 hours a day and can support 12 worship services a week. It’s conveniently located right next to the Pentagon Chaplain’s Office.

In the front of the chapel, a memorial window was designed to look like the Survivor’s Pin, which was given to every person who lived through the Pentagon attacks. It includes 184 pieces of red glass representing those who died.

The chapel is consistently used and is even a permanent part of the Pentagon tour.

A Visitor’s Center Is in the Works

The Pentagon Memorial is currently the only 9/11 attack site that doesn’t have a visitor’s center or museum. That’s going to change now that many visitors, especially children born after the tragedy, don’t fully understand its significance.

What To Know If You’re Visiting

You might have a lot of questions, like how to get there. Parking is strictly enforced at the Pentagon, so your best bet would be to take public transportation; however, handicapped parking is available.

Support Conservative Daily News with a small donation via Paypal or credit card that will go towards supporting the news and commentary you've come to appreciate.
Tags
9/11 the National 9/11 Pentagon Memorial The Pentagon
Katie LangeSeptember 10, 2019
Facebook Twitter Reddit Telegram Share via Email Print