Posted by: Press Operations in In The News, Military and Defense, Syndicated Posts, US News July 24, 2019 Comments Off on Twin Threats of China, Iran Differ, Policy Official Says > U.S. DEPARTMENT OF DEFENSE > Story 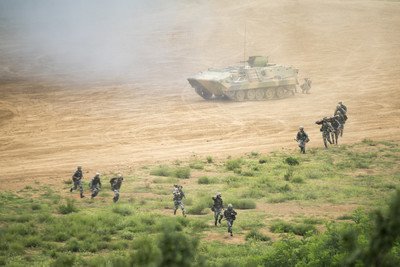 The threat of Iran to U.S. and regional allies is from miscalculation, while the threat of China is largely in violating world economic and democratic norms, said Undersecretary of Defense for Policy John C. Rood at the Aspen Security Forum in Aspen, Colorado.

Iran’s recent provocative activities are worrying and troubling, like shooting down a U.S. drone and seizure of a British tanker in the Strait of Hormuz, Rood said, and a miscalculation for further mischief on Iran’s part.

In response, the U.S. is launching Operation Sentinel to ensure freedom of navigation in the narrow waters between Iran and the Arabian Peninsula that are vital for world shipping, particularly petroleum products, Rood said.

Operation Sentinel has several components, the most important being a buildup of a coalition of navies to protect commercial shipping. Rood noted that allies and partners are much more dependent on petroleum from that region than the U.S., and he sees a willingness for them to participate.

Other steps the U.S. is taking to ensure protection of its forces are beefing up its presence in the area with additional troops, B-52 aircraft and a carrier battle group, as well as air and missile defense systems.

“It would be a grave mistake on their part to miscalculate,” Rood said. The U.S. has the resolve as well as the capability to protect its forces.

Rood noted that Iran is feeling the pressure from economic sanctions, designed to stop Iran’s nuclear program, export of terrorism and its extended range missile development.

The threat from China is more long term, Rood said. Militarily, they are developing advanced space and cyber capabilities as well as weapons like hypersonics.

But just as troubling, they are trying to export their authoritarian model of government to other countries through their Belt and Road Initiative, which, through predatory lending, leaves nations indebted to them.

Also, the Chinese are quietly gaining footholds in strategic places in the world such as Djibouti in the Horn of Africa — vital to shipping — and even in Greenland and Iceland, where future sea routes through the melting Arctic may open up.

At the end of the day, the U.S. has the advantage of building enduring relationships with allies and partners who value freedom and democracy, he said. The Chinese cannot pedal those values and their model is not sustainable in the long run.