A gun shop in North Carolina has purchased a billboard showing the four freshmen congresswomen known as ‘the Squad’ beneath the message “The 4 Horsemen Are Idiots.”

The billboard likens the freshmen house members to the “four horsemen” of the apocalypse, displaying photos of Democratic Reps. Ilhan Omar of Minnesota, Alexandria Ocasio-Cortez of New York, Rashida Tlaib of Michigan and Ayanna Pressley of Massachusetts, The Hill reported. 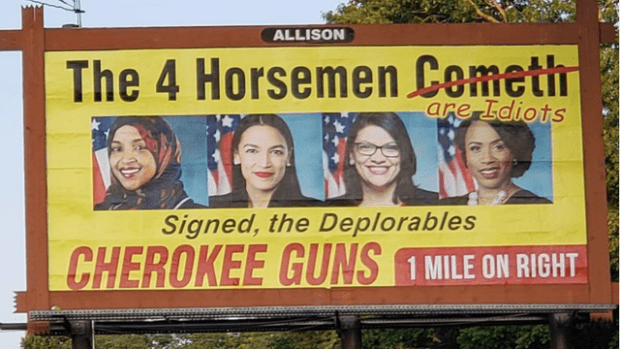 The gun shop owner, ‘Doc,’ said he bought the billboard to show support for President Donald Trump and oppose socialism, but knows the message is controversial because all four congresswomen are of color, according to WTKR.

“Well they’re calling us racist. I don’t care if it was four white women or four white guys that have their view, they would be on the billboard,” he said.

The billboard sits on highway 64 in Murphy, North Carolina, about 240 miles from Charlotte. Cherokee Guns announced it on their Facebook page Sunday.

The store also mentioned in their Facebook post that the billboard depicted on bumper stickers would be available for free at their store next week.

The billboard was criticized by the nonprofit group Coalition To Stop Gun Violence (CSGV), saying it was “disgusting anti-government violent rhetoric,” the Charlotte Observer reported.

This is not Cherokee Guns’ first foray into political expression. In 2015, the shop bought a billboard to display the message “Give me your tired, your poor….KEEP YOUR SYRIAN REFUGEES,” according to WTVC.