Posted by: Terri Moon Cronk in In The News, Military and Defense, Syndicated Posts, Trump Administration, US News May 29, 2019 Comments Off on Shanahan: U.S. Actions Deterred Attacks on Americans in Iraq 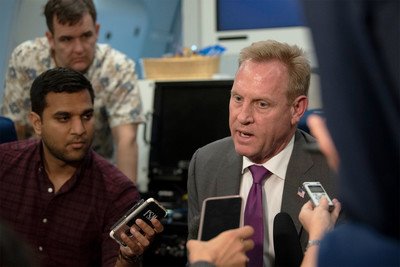 Aboard a military aircraft bound for multinational talks in Asia, Acting Defense Secretary Patrick M. Shanahan was pressed for answers on tensions in Iran by reporters traveling with him.

Noting that May has been “a pretty tense month,” the acting secretary explained that the Defense Department operates in a high-risk environment and gets intelligence consistently that speaks to the threats in the region.

“This [incident] was an anomaly, and I think you saw the response in which how quickly we responded when sending the carrier strike group and the B-52s is really reflective of our confidence in the intelligence,” Shanahan told reporters.

“It was so credible that we moved back quickly [in] a matter of hours. … It deterred attacks on our people in Iraq,” he said. It’s important to emphasize there was not an attack, he added.

“Since that time, we’ve had additional intelligence, which is the normal part of operating in Iraq and in the region,” he said. “And there are ongoing conversations between the [U.S.] leadership in country.”

Marine Corps Gen. Joe Dunford, chairman of the Joint Chiefs of Staff, is looking at the resources in the world that are available to shift, Shanahan noted. “And so [the chairman] brought to me a recommendation and he said, ‘Look, we want to increase the force protection,'” he said.

To do that, Shanahan said, the United States wants to be more conservative in four areas: increased intelligence, surveillance and reconnaissance; increased air support in the event of an attack; increased missile defense; and an engineering battalion to harden facilities.

However, Shanahan said he has not seen a change in Iran’s behavior, and the situation remains tense. “The Iranian threat to our forces in the region remains,” he said.

What’s key is how the United States de-escalates the situation, how the nation addresses Iranian proxies and the terrorism that goes on in the Middle East, and even more broadly, the prevention of nuclear weapons in Iran, he said.

The focus on force protection stems from Iranian activity in the region around its proxies, disruption in the Strait of Hormuz, and Iran’s ballistic missile and nuclear programs, Shanahan said.

“Those are the basis for the pressure campaign,” he said. “The response we’ve taken is a threat to the flow of energy and a threat to our men and women and our interests there in the region.”

Sponsored Content
2019-05-29
Terri Moon Cronk
0
Previous: Ackerman McQueen Severs Ties To NRA After Bitter Feud
Next: One Of Brett Kavanaugh’s D.C. Circuit Colleagues Is Speaking Out About His Confirmation