Posted by: Jim Garamone in In The News, Military and Defense, Syndicated Posts, US News May 24, 2019 Comments Off on Shanahan Approves Force Protection Deployment for Middle East Due to ‘Credible Threats’ 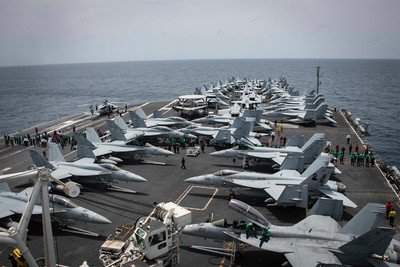 Acting Defense Secretary Patrick Shanahan has approved the deployment of about 1,500 service members and additional capabilities to the Middle East to deter Iranian efforts to destabilize the region.

The forces are necessary as a response to “credible intelligence we have received that Iran continues to plan for attacks by itself and its proxies against the United States, its forces and its allies in the region,” said Katie Wheelbarger, the acting assistant secretary of defense for international security affairs. Wheelbarger and Navy Vice Adm. Mike Gilday, the director of the Joint Staff, briefed Pentagon reporters on the situation.

The capabilities will enhance defenses, harden positions and provide additional intelligence, surveillance and reconnaissance capabilities. “I want to make clear that our policy toward Iran has not changed,” Wheelbarger said. “As the president and secretary have made clear, we do not seek conflict with Iran. We do not see these additional capabilities as encouraging hostilities. We see them as defensive in nature.” The United States wants Iran to come back to the negotiating table to address a comprehensive deal “that addresses the range of their destabilizing behavior,” Wheelbarger said.

Iran has forced the United States to take these steps as Iranian leaders have initiated actions that pose a danger to the United States, allies in the region and the globe, Gilday said. “In the recent past, Iranian leaders have publicly threatened to close the Strait of Hormuz,” he added. “They have backed up those threats with actions, posturing their forces in an effort to intimidate the movement of international trade and energy sources.”

Iran is responsible for at least three recent attacks in the region, including the attacks on oil tankers in Fujairah in the United Arab Emirates, drone attacks on oil pipelines in Saudi Arabia, and rocket attacks on the Green Zone in Baghdad last weekend.

Iran has also modified dhows — Middle Eastern boats — capable of launching cruise missiles. He called this part and parcel of a “dangerous, escalatory strategy by Iran to threaten global trade and destabilize the region,” Gilday said.

In response to these threats the United States has already sped up deployment of the USS Abraham Lincoln Carrier Strike Group to the region and deployed a bomber task force and a Patriot missile battery.

Over the coming weeks, DOD will flow additional intelligence, surveillance, and reconnaissance aircraft; engineers to provide force protection improvements throughout the region; and a fighter aircraft squadron to provide additional depth.

“While we do not seek conflict with Iran. We are determined to protect our forces and interests in the region from attack, and we will remain postured and ready to respond,” Gilday said.

Gilday shone a bit of light into the intelligence story that is driving the request. “This truly is operations driven by intelligence,” he said.

Intelligence professionals believe the Iranian campaign against the United States and its allies spans the region from the Strait of Bab Al Mendeb to the Strait of Hormuz to Yemen to Iraq. “Importantly, we have seen this manifested in the attacks in … Fujairah, the attacks in Saudi Arabia … and most recently in the rocket attack … in Baghdad,” the admiral said. “We continue to see those threat streams as very active. We continue to see the planning that is occurring not only with the Iranian Revolutionary Guard Corps forces, but also … with Iranian proxies in Yemen.”

Gilday said the intelligence indicated the origins of these threats trace back to Iranian leaders at the highest levels.