Posted by: Chuck Ross in In The News, US News April 24, 2019 Comments Off on Georgian Businessman Releases Texts With Cohen That Were Left Out Of Mueller Report

A Georgian-American businessman is accusing Special Counsel Robert Mueller of publishing “glaring inaccuracies and misrepresentations” about rumors of alleged sex tapes of Donald Trump during a visit to Moscow in 2013.

In a letter sent to Attorney General William Barr on Tuesday, a lawyer for the businessman, Giorgi Rtskhiladze, called on the Justice Department to retract a footnote in Mueller’s report mentioning an Oct. 30, 2016 text message exchange he had with Michael Cohen about a rumored Trump tape.

Rtskhiladze claims that the special counsel’s report inaccurately quotes his text message with Cohen. He says that additional text messages not quoted in the report show that he was doubtful about a rumor he had heard from an associate in Moscow about the existence of a tape.

“We strongly demand that a full and immediate retraction of these falsehoods should be issued forthwith to restore his good name,” wrote A. Scott Bolden, a lawyer for Rtskhiladze. The letter was first reported by Bloomberg News and obtained by The Daily Caller News Foundation.

Bolden’s letter takes issue with several parts of the the special counsel’s report, including the quote of Rtskhiladze’s text message as reading: “Stopped flow of tapes from Russia but not sure if there’s anything else. Just so you know….”

Rtskhiladze actually wrote that he had “stopped flow of some tapes (emphasis added),” the text messages show.

According to Mueller’s report, Rtskhiladze told prosecutors during interviews in 2018 that he was told that the tapes were fake but that he did not communicate that to Cohen. Cohen told Muellers’ team in a Sept. 12, 2018 interview that he notified Trump about the message from Rtskhiladze.

Rtskhiladze claims that his additional texts with Cohen show that he had no direct knowledge of the tapes, and that he saw them as mere rumor, rather than fact. Bolden also says that Rtskhiladze did not hear the rumor first-hand.

“Not sure of the content but person in Moscow was bragging had tapes from Russia trip. Will try to dial you tomorrow but wanted to be aware. I’m sure it’s not a big deal but there are lots of stupid people,” Rtskhiladze wrote in the texts, which were provided to TheDCNF.

“You have no idea,” Cohen replied.

Rtskhiladze responded: “I do trust me.” 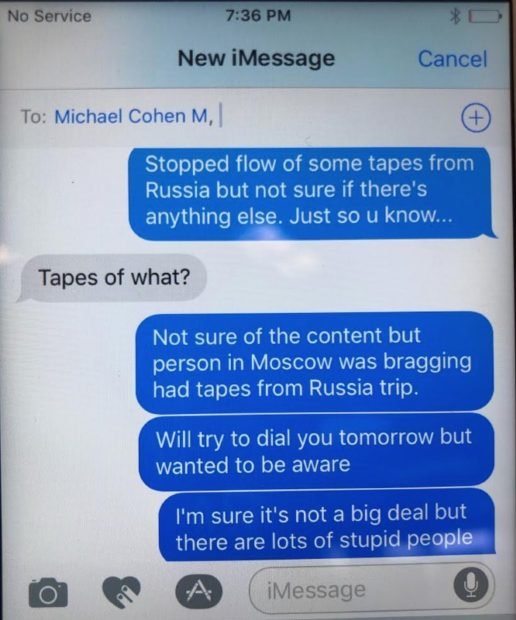 Bolden says in the letter that Rtskhiladze was not present at the event in Moscow where the claim about the tape was allegedly made.

Melanie Bonvicino, a spokeswoman for Rtskhiladze, told TheDCNF that he has not been in Russia in more than a decade. She said that Rtskhiladze does not know who made the comment at the Moscow party, but that he heard about it from another person. Rtskhiladze identified the intermediary during interviews with Special Counsel Robert Mueller’s team.

The footnote in the special counsel’s report reignited speculation about the most salacious allegation contained in the infamous Steele dossier. In the unverified report, author Christopher Steele alleged that the Kremlin had video of Trump with a group of prostitutes in a Moscow hotel room during his visit there in November 2013 for the Miss Universe pageant.

Trump has vehemently denied taking part in the activities described in the dossier, and such a tape has never been produced. Steele’s alleged source for the claim has also come under intense scrutiny. People who were with Trump during his visit to Moscow have doubted the claims about the tape, saying that he only stayed one night in the Russian capital, and was only alone for a few hours.

Rtskhiladze’s texts do establish, however, that rumors about an alleged sex tape made their way to Trumpworld during the campaign.

Cohen acknowledged as much during a Feb. 27 congressional hearing when he dismissed rumors about a blackmail tape of his former boss.

“Are you aware of any videotapes that may be the subject of extortion or blackmail?” a Democratic lawmaker asked Cohen.

“I’ve heard about these tapes for a long time. I’ve had many people contact me over the years. I have no reason to believe that tape exists,” said Cohen, who cooperated with the special counsel against Trump.

According to Bolden’s letter, Rtskhiladze was born in Georgia, the former Soviet republic, and has lived in the U.S. since 1991. He became a citizen in 2017.

Bolden acknowledged in the letter to Barr that Rtskhiladze’s claim of “stopping the flow” of the tapes “may have been a poor choice of words.”

But he said that Rtskhiladze was using a “colloquialism” to convey to Cohen “indicating that there was nothing to the rumors of the tapes, and that he did not believe there were any tapes, nor had he seen what was on the tapes, even if they existed.”

The text message exchange occurred during a tumultuous time on the Trump campaign when the Republican candidate was dealing with an avalanche of stories about his relationships with woman. The onslaught of reports generated widespread rumor and speculation about other possible Trump dalliances.

0
Previous: Activist Says He Falsely Confessed To War Crime As Part Of Anti-War Efforts
Next: 9 Radical Policies 2020 Democrats Are Putting On The Table