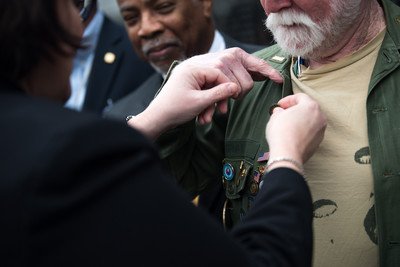 National Vietnam War Veterans Day observances are taking place across the nation, including at the Vietnam Veterans Memorial in Washington.

At “The Wall,” as it’s commonly called, a number of veterans were awarded Vietnam Veteran lapel pins by Kim Joiner, the acting principal deputy assistant to the secretary of defense for public affairs, on behalf of the Defense Department. Joiner also participated in a wreath-laying event at the memorial.

During this second anniversary of the National Vietnam War Veterans Day, DOD and the Veterans Affairs Department are supporting more than 1,600 similar events in many states across the nation.

The recognition is extended to men and women who served on active duty in the U.S. armed forces from Nov. 1, 1955, to May 15, 1975, whether in peacetime or war. Nine million Americans — about 6.4 million of them living today — served during that period.

As of this month, 58,320 U.S. service members’ names were inscribed on The Wall. The memorial is located on the National Mall, near the Korean War Veterans Memorial and the World War II Memorial.