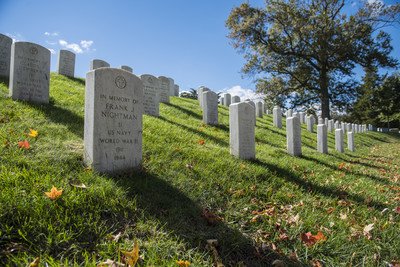 Work is expected to begin next year on a long-planned expansion of Arlington National Cemetery in Virginia, the cemetery’s executive director told Congress.

The cemetery now occupies about 625 acres of land near the nation’s capital and is the final resting place of more than 400,000 service members and their family members.

But, after more than 150 years of service, the cemetery is running out of room.

“The expansion will add 37 acres of burial space and extend the cemetery’s active life,” Karen Durham-Aguilera said during a hearing of the House Appropriations Committee’s subcommittee on military construction, veterans affairs and related agencies.

By the start of the Civil War, the property had passed into the family of Robert E. Lee through marriage. In May 1861, Union troops occupied the estate after the Lee family fled south.

The property served as a Union Army camp and headquarters throughout the war, and starting in 1863, as the site of Freedman’s Village, a home for freed slaves that provided housing, education, training and medical care to help former slaves transition to freedom.

The first military burial at Arlington, for William Henry Christman, was made on May 13, 1864. By war’s end, more than 16,000 soldiers had been buried there.

Today, the cemetery holds funeral services Monday through Saturday (except federal holidays), conducting between 27 and 30 services each weekday and between six and eight services each Saturday. Information on burial eligibility and military honors is available on the cemetery’s website.