Projection is a common thing in politics on the left and the right.  Many politicians couldn’t win elections if they were unable to engage in such projection and in Virginia that has been shown for us as clear as can be.

In 2017 in the Virginia Governor Race between Ralph Northam and Ed Gillespie the Northam campaign released an ad which depicted racist Ed Gillespie supporters terrorizing minority children, but waiting for anyone to see was the yearbook for Governor Ralph Northam showing actual racism and disturbing bigotry.

Democratic allies of the Governor, who decried Cory Stewart because he associated with Paul Nehlen before he became anti-semitic and a white nationalist, who attacked Republicans over the Charlottesville response, and who derided former Congressman Dave Brat as a racist for not wanting to see the immigration problems Europe has, well they are defending Ralph Northam.

“His whole life has been about exactly the opposite and that’s what you need to examine, not something that occurred 30 years ago,” said Senate Minority Leader Richard L. Saslaw (D-Fairfax). “While it’s in very poor taste, I would think no one in the General Assembly who would like their college conduct examined. I would hate to have to go back and examine my two years in the Army. Trust me. I was 18 years old and I was a handful, OK? His life since then has been anything but. It’s been a life of helping people, and many times for free.”

Ralph Northam spent the majority of his campaign attacking Ed Gillespie as a racist but completely hid from the Virginia voters his racist history. 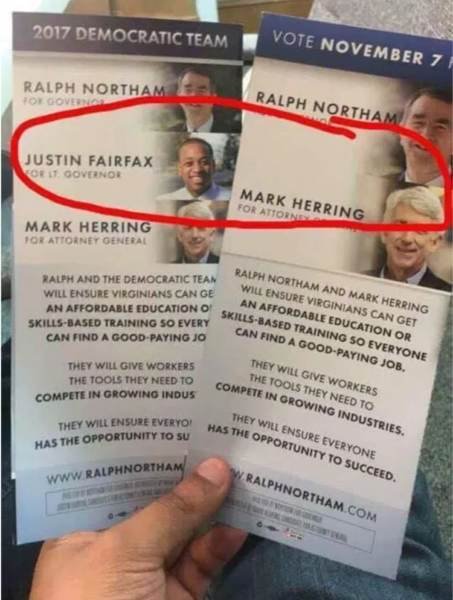 The Gateway Pundit reported a fascinating occurrence in the campaign omitting his black running mate Justin Fairfax, but it shows Mark Herring the Attorney General candidate, why is that?

The two Virginia Senators Tim Kaine and Mark Warner have refused to call for the resignation of Ralph Northam but they say were insistent on ruining Kavanaugh over things no one knows happened.

NEW: Individual statements from @timkaine & @MarkWarner call the @RalphNortham yearbook picture “shocking and deeply offensive” & “horrible,” but do NOT call on Northam to resign —> pic.twitter.com/OxpflnwNwA

Northam’s hometown Congresswoman Elaine Luria called for the resignation of the Governor saying,

More Luria: “Unfortunately, the existence of this photograph does not bring us together. I ask Governor Northam to resign. This isn’t about politics, this is about what is right and wrong.” // She represents his hometown in #VA02

“I am deeply sorry for the decision I made to appear as I did in this photo and for the hurt, that decision caused then and now.”

“This behavior is not in keeping with who I am today and the values I have fought for throughout my career in the military, in medicine, and in public service. But I want to be clear, I understand how this decision shakes Virginians’ faith in that commitment,” Northam said. “I recognize that it will take time and serious effort to heal the damage this conduct has caused. I am ready to do that important work. The first step is to offer my sincerest apology and to state my absolute commitment to living up to the expectations Virginians set for me when they elected me to be their Governor.”

Northam has yet to say whether he was in the KKK robe or the blackface.

Most Democrat politicians nationally have called for the resignation of the embattled Governor but many Virginia Democrats won’t call for it.

Questions remain for the GOP and the opposition research team; how did they not find this especially after Northam’s campaign released the ad that depicted Gillespie supporters as racists who terrorize innocent minority children? As former Republican strategist and commentator Ali Alexander said Friday, this lends credence to those who say that Washington, and indeed local politics are a uniparty delusion.

No one knows just what is in Ralph Northam’s heart, it seems to be very frightening what is in his heart being supportive of infanticide and having a racist history, but regardless the right is adopting the brilliant tactic from Alinsky when he said “Make the enemy live up to their own book of rules”

If Northam were to resign Lieutenant Governor Justin Fairfax would take over as Governor.