Vice President Mike Pence is in Colombia meeting with Latin American leaders who hope to use economic and diplomatic pressure to force former President Nicolas Maduro to leave Venezuela so that interim-President Juan Guaido can take over and set up new elections.

So far, Maduro has refused to leave and taunted those who back Guaido.

“Go home, Yankee!” Maduro said to a crowd of supporters, taunting the U.S. President. Maduro has also officially cut ties with neighbor Colombia over its support of Guaido. 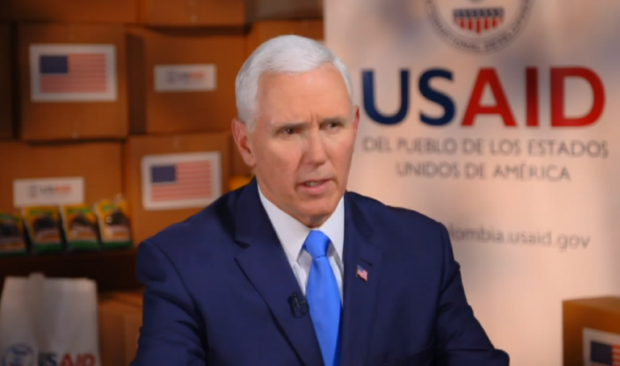 On whether there is talk of the United States engaging with the Colombians and the Brazilians to force Nicolas Maduro out of power:

On whether he discussed military action today:

“We’re simply not going to allow a regime that terrorizes and oppresses, and brings such deprivation and poverty to its people to continue.”

“Our message is very simple. To the people of Venezuela, including members of the Armed Forces – The United States of America stands with you if you will stand for freedom. It’s time. It’s time for the members of the Armed Forces to look aside from the mask-wearing terrorists that make their way through the streets and threaten violence; To look aside from the brutality of the Maduro regime. To think of their children, to think of their families, to think of their country, and their future.”

On the American hostages in Venezuela:

“We demand justice for any American that is incarcerated anywhere in the world and President Trump made, sent a very clear message a week ago that the Maduro regime should understand that any violence against Americans in Venezuela, any violence against president Guaido or his family or other opposition leaders, any violence against people that are simply standing in the streets to peacefully protest for freedom will not be tolerated by the United States of America and our allies.”

“We announced today additional sanctions. More nations today are recognizing the legitimate President of Venezuela is President Juan Guaido. And I truly do believe that despite the brutality of this last weekend, where 5 innocent civilians were murdered, where truckloads of medicine and food were burned, that the momentum is on the side of freedom; The momentum is on the side of those precious families I just met with, that soon freedom will be restored in Venezuela. And the millions who have fled oppression and deprivation will finally come home.”