Schwartz first tries to spin McCabe’s words by caveating the Justice Department meeting. She wouldn’t say there weren’t discussions, just that they weren’t “extended”, whatever that’s supposed to mean. McCabe’s spinster then throws Rosenstein under the bus making it appear that any 25th Amendment, ousting of the president talk came from him.

The sudden walk-back comes just ahead of McCabe’s book tour and any tarnish on his image needs to be cleaned up before he starts the main bookselling effort.

Until the 60 minutes interview airs, we can’t be sure exactly what words McCabe used as the phrasing that’s been made public comes from host Scott Pelly, who interviewed him.

“There were meetings at the Justice Department at which it was discussed whether the vice president and a majority of the cabinet could be brought together to remove the president of the United States under the 25th Amendment,” Pelly relayed from the interview. 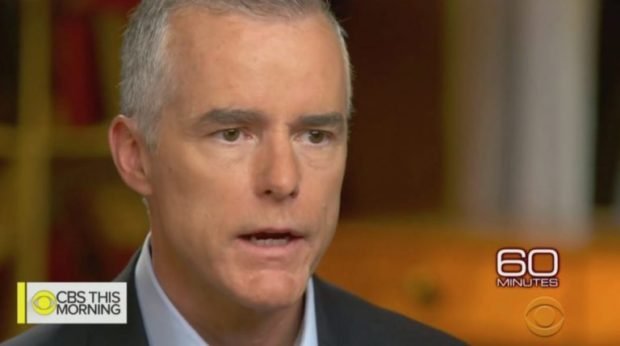 Then again, Schwartz may have successfully lobbied to have the quote cut from the version set to air Sunday at evening on CBS.

Support Conservative Daily News with a small donation via Paypal or credit card that will go towards supporting the news and commentary you've come to appreciate.
Tags
Andrew McCabe The 25th Amendment