Zimbabwe has started to make headlines again but not for the 89 sextillion percent hyperinflation or the seizure of farms from white people, but because the country resembles a warzone. The successor to Robert Mugabe, Emmerson Mnangagwa, is acting just as authoritarian as his predecessor. Mnangagwa has been a guerrilla fighter most of his life having been trained by China, Egypt (under Gamal Abdel Nasser) and North Korea. Mnangagwa was implicated in the massacres in the war in Zimbabwe in the 1980s. He was accused of masterminding the 2008 attacks on opposition during the stolen election where Robert Mugabe lost the 1st round securing 43% against the 47% for opposition leader Morgan Tsvangirai on 42.8% turnout and then the second round came and Mugabe won 85.5% with  42.4% turnout.

Zimbabwean President Emmerson Mnangagwa living up to his nickname “Crocodile” has launched a brutal crackdown on dissent as he consolidates his power in Zimbabwe.

The Zimbabwean security forces have been beating, torturing, killing protesters, and raping countless women as they conduct house-to-house searches, according to human rights groups.

‘We have received very disturbing reports of a number of cases of women allegedly raped by members of security forces,’ said Dewa Mavhinga, southern Africa director for Human Rights Watch.

He added: ‘Beatings, harassment, and other abuses have continued after Mnangagwa’s return and there are no clear actions from the government to hold accountable those committing the abuses.’

President Mnangagwa has vowed an investigation to the violent incidents and the sexual assaults committed by members of the armed forces, saying that  “if necessary heads will roll” which is all well and good but the reports of rapes, torture and killings continue to flood in from Zimbabwe. The President vows that heads will roll, and the army says that the violent thugs seek to destroy the reputation of the army… all this sounds great and the government can start by going after the soldier who admitted to The Daily Telegraph who admitted to rape and torture of protesters in a government-sanctioned crackdown.

Likewise, violence or misconduct by our security forces is unacceptable and a betrayal of the new Zimbabwe. Chaos and insubordination will not be tolerated. Misconduct will be investigated. If required, heads will roll 3/4

The crackdown has also seen the rounding up of many children by authorities and sending them to cages and prisons and tried as adults in kangaroo courts. “Children as young as 11 years old have been detained on frivolous charges,” said Deprose Muchena, Amnesty’s Southern Africa director. “The authorities must immediately stop this merciless crackdown.”

For a couple of days, the government shut down the internet in the country and information from Zimbabwe became virtually impossible to receive.  However, the Zimbabwean High Court ordered the restoration of the internet.

So far reports indicate a dozen people have been killed in the crackdown and over 320 have been injured. There is no tally on how many rape victims there have been in this crackdown.

President Emmerson Mnangagwa announced an increase of over 100%  in fuel prices he said was in response to increased demand and rampant illegal trading. His solution pushes the largely very poor Zimbabwean people to look to foreign countries and the black market for gas. The people have gone from dealing with increased demand to being unable to pay for gas. In reality, why the government is doing this is because of the fact the government is broke. Since the era of Robert Mugabe, they have had a very hard time paying their civil servants and keeping the lights on in ministry buildings. Zimbabwe even suffers from shortages of bread and cooking oil. The government cannot get more money from taxes, and the people will pay for gas elsewhere sending revenue to other countries and not to the Zimbabwean government. Overnight, he made gas the most expensive in the world in Zimbabwe with a GDP per capita of $1,149. 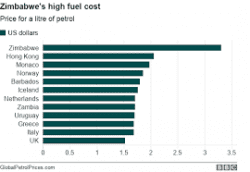 The Zimbabwe Congress of Trade Unions, the country’s main workers union, slammed the idea to make the price of living for the very poor Zimbabwean people even more expensive. Their statement read, “Workers’ government has officially declared its anti-worker, anti-poor and anti-people ideological position by increasing fuel prices. Workers’ salaries have been reduced to nothing and our suffering elevated to another level,” it said.

The unemployment rate is massive in Zimbabwe, and among those employed, Zimbabwean government workers barely get paid, doctors, nurses, entrepreneurs, and almost every part of Zimbabwean society have gone on strike in one way or another as the wages they currently live on are not sustainable in the slightest. The revenue that will come in from the deeply unpopular fuel tax will not sustain the disastrous economy of Zimbabwe

The IMF spokesman Gerry Rice painted a very bleak future for Zimbabwe saying “I would say that of course Zimbabwe is facing major challenges and just in terms of the unrest, we encourage all stakeholders to collaborate peacefully in developing and implementing policies that will stabilize the economy and promote sustainable and inclusive growth.

On the overall economic situation, debt and the IMF, there has been no real change in what I have said here recently which is Zimbabwe continues to be in a difficult situation regarding debt with protracted arrears to official creditors including multilateral creditors such as the World Bank which severely limits Zimbabwe’s access to international financial support.

In terms of the IMF, Zimbabwe has, in fact, cleared its arrears to us, to the Fund, but our rules preclude lending to a country that is still in or under arrears to other international financial situations. So until that particular situation is resolved, we would not be moving forward with financial support for Zimbabwe.

I said here the last time that the authority’s economic policies we felt were headed in the right direction broadly in terms of addressing the fiscal deficit and monetary policy and so on. I won’t repeat what I said the last time but that’s where we are on Zimbabwe.”

As unrest grows in the very poor Southern African country, as revenue declines, as people buy gas elsewhere, and add in the fact none of the global financial institutions want to give any loans to throw a lifeline to the economy, Zimbabwe will be set to completely collapse.

Support Conservative Daily News with a small donation via Paypal or credit card that will go towards supporting the news and commentary you've come to appreciate.
Tags
Zimbabwe