Virginia is considering a bill allowing women to abort their unborn child until the moment the baby is born. 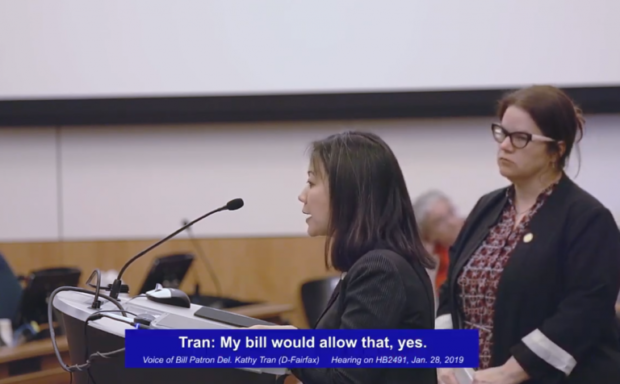 Democratic Delegate Kathy Tran introduced HB2491, or the Repeal Act, which seeks to repeal the state’s current restrictions on late-term abortions. If passed, the measure will do away with the state’s requirement that second and third-trimester abortions be performed only to preserve the health or life of the woman. A woman seeking to abort would no longer need to obtain an ultrasound before having an abortion, under the proposed law.

“The third trimester goes all the way up to forty weeks,” according to Tran, The Republican Standard reported. The bill would allow a doctor to perform an abortion when a woman is dilating, meaning she is about to give birth.

Todd Gilbert (R): Where it’s obvious a woman is about to give birth…would that be a point at which she could still request an abortion?

Kathy Tran (D): My bill would allow that, yes pic.twitter.com/UHgzU3EGDA

The proposal saw its first subcommittee hearing Monday and has received support from Virginia Gov. Ralph Northam as well as a number of Democratic lawmakers, according to the Standard.

“This bill creates abortion, virtually on demand, up until the point of birth,” Family Foundation President Victoria Cobb said, condemning the proposal, the Standard reported. The group’s mission is to “empower families in Virginia by applying a biblical worldview and founding principles to culture and public policy,” according to its website.

The proposal comes after New York passed a bill Jan. 22 expanding abortion access and codifying a woman’s right to abort under state law. New York Gov. Andrew Cuomo signed the Reproductive Health Act, removing abortion from the state’s criminal code and allowing women to have abortions after 24 weeks in cases where “there is an absence of fetal viability, or at any time when necessary to protect a patient’s life or health,” according to the legislation.