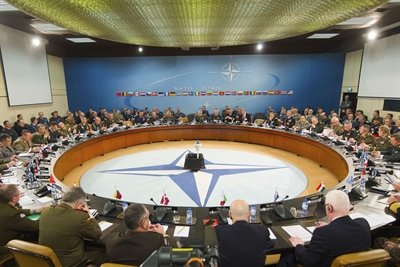 The United States is one of the founding members of NATO, a military alliance that was formed in 1949 and is still going strong today, some 70 years later.

Before their meeting, Shanahan praised Stoltenberg for his work to arrive at an equitable sharing of the security burden. “Since President Trump took office, America’s NATO allies have stepped up defense spending by a total of $41 billion,” he said. “Allied defense spending increased by more than 9 percent from 2016 to 2018 – the largest increase is 25 years. By 2020, our NATO allies are projected to increase defense spending by approximately $100 billion.”

So what is NATO, and what does it do?

NATO stands for North Atlantic Treaty Organization. It was formed in 1949 to provide collective security against the threat posed by the Soviet Union. The U.S. viewed an economically strong, rearmed and integrated Europe as vital to the prevention of communist expansion across the continent.

The original members were Belgium, Canada, Denmark, France, Iceland, Italy, Luxembourg, the Netherlands, Norway, Portugal, the United Kingdom and the United States. Though the Soviet Union has long since fallen, the world has continued to be a dangerous place throughout the nearly seven decades since NATO was formed. Now 29 nations are members of the alliance.

To make it easier for so many countries to communicate, NATO has two official languages: English and French. This means that it also has two acronyms — in French, NATO is OTAN, which stands for Organisation du Traité de l’Atlantique Nord.

NATO promotes democratic values and encourages consultation and cooperation on defense and security issues to build trust and, in the long run, prevent conflict.

One of the founding principles of NATO is Article 5 of its charter, which states that an armed attack on one member nation would be considered as an attack on all. The alliance invoked Article 5 for the first time in its history following the 9/11 attacks.

In addition to contributing to the war effort in Afghanistan, NATO member nations responded by helping the U.S. military with airspace defense and security over the United States and with maritime patrols in the Mediterranean Sea to guard against movement of weapons and terrorists.