‘Polar Vortex’ Will Have Nearly 90 Percent Of US Below-Freezing

Posted by: Michael Bastasch in In The News, US News January 28, 2019 Comments Off on ‘Polar Vortex’ Will Have Nearly 90 Percent Of US Below-Freezing

Nearly 90 percent of the continental U.S. will experience below-freezing temperatures over the next five days as Arctic air moves south, according to forecasts.

The “polar vortex” event will have 89 percent of the continental U.S. with below freezing weather, meteorologist Ryan Maue said. In fact, all of the lower-48 are forecast to experience freezing weather, including Florida.

Arctic blast by-the-numbers:
Coldest temperatures forecast during the next 5-days:

The National Weather Service (NWS) is warning of “extreme and dangerous” cold weather across the Great Plains and Great Lakes where wind chill could dip as low as -60 degrees Fahrenheit. NWS expects temperature “lows in the -30s and -40s” Wednesday through Thursday.

There's cold, and then there's COLD! Extreme and dangerous COLD! is forecast this week from the Northern Plains through the Great Lakes with lows in the -30s and -40s and wind chills as low as the -60s Wed-Thu! If you can't stay cozy inside, be sure to cover any exposed skin! pic.twitter.com/dJNpT0qGHs 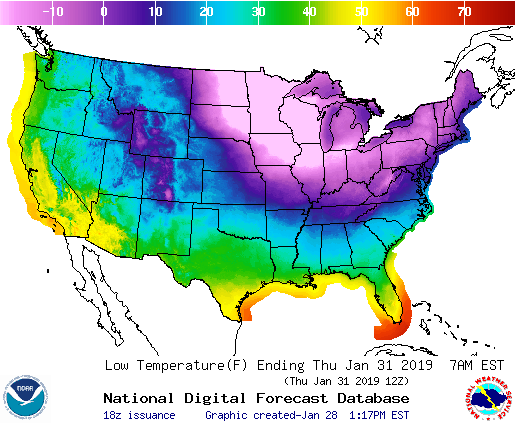 CNN reports that 75 percent of the U.S. population, more than 220 million people, could see below-freezing temperatures in the coming days. Frigid weather is expected to shatter dozens of temperature records throughout the eastern half of the country.

Temperatures across the region are expected to be as low as -40 degrees, and Chicago could break an all-time record low of -27 degrees Celsius set back in 1985, according to Maue.

And @NWSChicago has adjusted their Thursday morning low temperature to -25°F … now within only 2°F of the all-time record cold! https://t.co/yiPLU1xYgh

Tagged with: The Weather