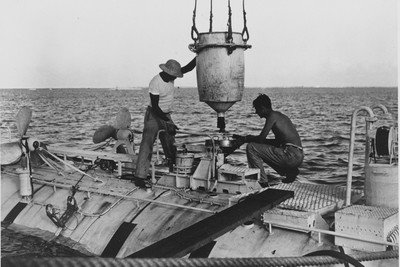 Thousands have climbed Mount Everest, and a handful of people have walked on the moon. But reaching the deepest part of the ocean? Only three people have ever done that, and one was a U.S. Navy submariner.

In the Pacific Ocean, somewhere between Guam and the Philippines, lies the Marianas Trench. At 35,814 feet below sea level, its bottom is called the Challenger Deep — the deepest known point on Earth. In fact, to put it into perspective, think about the Titanic, which was found 12,600 feet below the surface of the Atlantic Ocean — nearly 2.4 miles down.

The Challenger Deep is nearly three times deeper than that.

Only three people have ever made it to the Challenger Deep. The first two did it 59 years ago this week: Navy Lt. Don Walsh, a submariner, and explorer Jacques Piccard.

Walsh’s engineering background allowed him to be a test pilot for the Trieste, a deep-diving research submersible purchased on behalf of the Navy. The rig was specially equipped with 5-inch-thick steel walls to withstand immense pressures — eight tons of pressure per square inch, to be specific, which is like 2,365 pounds sitting on a person’s fingernail.

On Jan. 23, 1960, Walsh and Piccard made history when they made the five-hour, 6.78-mile odyssey to the world’s deepest-known point.

What did they find there? Walsh talked about his experience in an interview with the Office of Naval Research, so we’ll let him explain:

“As we approached the seafloor, we could see it coming up, and we did see about a foot-long flatfish, like a halibut or sole — small. But that told us quite a bit, just that one glimpse, because that’s a bottom-dwelling form — two eyes on one side — and if there’s one, there’s more. That tells you there’s also sufficient oxygen and food at that depth because they’re bottom-dwelling,” Walsh said.

“We did not see anything at the bottom once we landed because the bottom sediment stirred up, and it was like somebody painted our viewport white,” he continued. “We spent a half-hour on the bottom, and the rest of the time coming up. And that was it.”

That might not seem like much to some, but it opened up a whole new world for explorers.

The Navy has always been interested in undersea exploration for navigation, scientific research, education and strategic purposes. In fact, by 1958, it funded nearly 90 percent of all U.S. oceanographic ventures.

The Trieste trip was the culmination of Project Nekton, a series of dives meant to test the viability of using manned craft at extreme depths to study marine life and how temperature, pressure and sound interact at great depths, among other scientific questions.

Whether the Navy is diving, collecting scientific data, investigating shipwrecks or testing autonomous underwater vehicles, this mission continues to evolve and has led to collaborations with many in the civilian scientific community.

Support Conservative Daily News with a small donation via Paypal or credit card that will go towards supporting the news and commentary you've come to appreciate.
Katie LangeJanuary 23, 2019
Facebook Twitter Reddit Telegram Share via Email Print