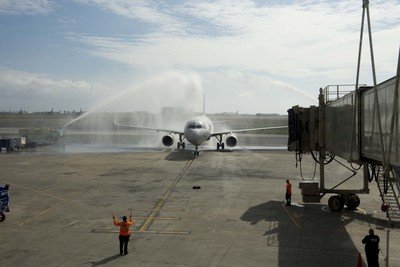 In 2016, I was on an Honor Flight to Hawaii for the 75th commemoration of the Pearl Harbor attacks that launched the U.S. into World War II. The Honor Flight Network has a mission to transport America’s veterans to sites of historical significance so they can see the memorials dedicated to their service and sacrifices.

And ahead of the Pearl Harbor 75th anniversary, I got the difficult assignment of going with them.

From the gateside entertainment before the flight — complete with 1940’s era dancers and singers — to the challenge coins given to each service member, it was the most rewarding flight I’ve ever been on. And not just because of the filet mignon, shrimp and sushi served up by legendary actor and avid military supporter-turned flight attendant Gary Sinise, or the fact that I was flying to paradise.

I was surrounded by nonagenarians and their family members, and all of them had energy. A handful of the vets wore garrison caps that said “Pearl Harbor survivor.” Others wore ball caps adorned with pins that said “World War II veteran,” and some even wore their old uniforms.

Some chatted with their neighbors, others signed the pages of history books they were featured in, and some napped. But I didn’t want to sleep. I wanted to talk to as many of them as I could. After all, not many people get the chance to hear stories from a World War II veteran firsthand, let alone a plane full of them.

I’ll always remember Navy pilot Jack Holder, who wrote a memoir called “Fear, Adrenaline and Excitement” about his wartime experiences. He sold me a signed copy on the plane, and I couldn’t put it down when I finally got around to reading it.

At the time I met with him, survivor Bob Batterson had returned to Pearl Harbor four times since the attacks, but said being part of the Honor Flight was extra special.

“This is just a great opportunity to get back with some of the guys again and go back to Pearl Harbor and reminisce,” he said. “I was overwhelmed when I received this letter from American [Airlines] saying ‘We’d like you to be our guest.’ I couldn’t believe what I was reading.”

Then there was the feisty Barney Leone, a 91-year-old Bronx native who served all over the Pacific (he’s the one tipping his hat in the photo above). He also said being invited on the Honor Flight meant a lot.

“It brings back some good memories,” Leone said. “I’m here not to honor myself but to honor the guys who put down their lives in sacrifice to make this trip possible.”

He didn’t stop smiling the whole time we talked — not even when he cheekily told me he wished I was alive when he’d gotten back from the war!

And lastly, there was Army vet Thomas Petso, who was at Wheeler Army Airfield playing football when the Japanese began their bombing campaign.

“I was there when they dropped the first bomb. I was 18 years old,” the then-94-year-old Petso told me.

Petso died two months after we chatted on that flight. I can’t explain how glad I am to have heard his story personally before then.

When the plane pulled up to the jet bridge in Honolulu, I quietly sneaked through the gate, slipping behind the mass of cameras waiting to celebrate their arrival. They were rock stars that week, after all, and they were getting the hero’s welcome they deserved.

If it weren’t for the Honor Flight Network, they might not have had the means to get there themselves.