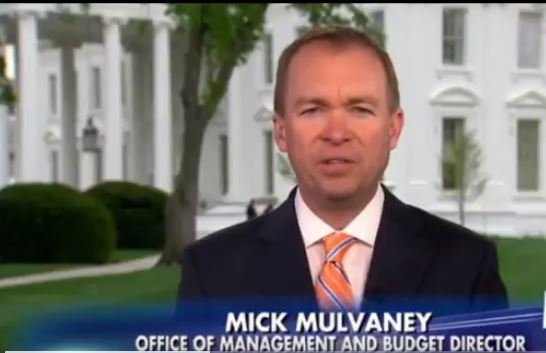 “I am pleased to announce that Mick Mulvaney, Director of the Office of Management & Budget, will be named Acting White House Chief of Staff, replacing General John Kelly, who has served our Country with distinction,” the president posted on Twitter. “Mick has done an outstanding job while in the Administration.”

“I look forward to working with him in this new capacity as we continue to MAKE AMERICA GREAT AGAIN! John will be staying until the end of the year. He is a GREAT PATRIOT and I want to personally thank him for his service!” he added.

Mulvaney will not relinquish his post at OMB, but won’t be spending much time there according to White House Press Secretary Sarah Sanders.

“Mick Mulvaney will not resign from the Office Of Management and Budget, but will spend all of his time devoted to his role as the acting Chief Of Staff for the President,” Sanders said in a statement. “Russ Vought will handle day to day operations and run OMB.”

When asked why Mulvaney was picked, a senior administration official told reporters that, “He got picked because the president liked him they get along,”

“He knows Congress. He knows Capitol Hill,” the official added.

Another administration official told reporters that President Trump chose to name Mulvaney as ‘acting’ chief of staff, instead of chief of staff, because, “It’s what the president wants right now and, if we have anything else we’ll let you know.”

Democrats Politicize And Criminalize Even Your Very Thoughts