Services Putting Their Assets on Ice

Posted by: David Vergun in Military and Defense, Syndicated Posts, US News December 10, 2018 Comments Off on Services Putting Their Assets on Ice 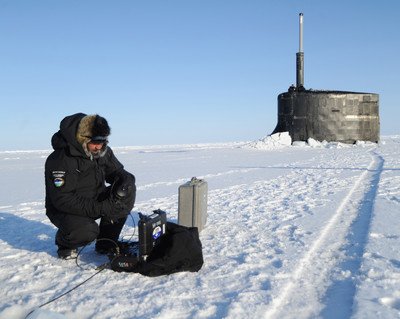 With great power competition heating up, U.S. military leaders are pointing their planes, ships, subs, missiles and radars north toward the Arctic.

Four advisors, representing the Air Force, Navy, Coast Guard and the National Oceanic and Atmospheric Administration, met for a discussion on the Arctic at the Wilson Center in Washington, Dec. 4.

U.S. aircraft have been operating in the area near the Arctic since World War II, when the Japanese invaded the Alaskan islands of Attu and Kiska, said Iris Ferguson, the senior advisor for Air Force space and information operations.

The Arctic is 1.5 times the size of the United States, she said, and 79 percent of U.S. military assets in that region today belong to the Air Force. Those resources include ballistic missile warning sites and fighter jets — as well as squadrons of tanker aircraft to refuel them.

By 2022, there will be more advanced aircraft in Alaska than anywhere else in the world, Ferguson noted.

Air Force ski-equipped LC-130 Hercules aircraft support National Science Foundation missions to both the Arctic and Antarctic, she said. The service also maintains the Air Force Rescue Coordination Center, which conducts an average of 1,000 missions per year in the Alaska region. Additionally, the Air Force tracks satellites from Alaska and participates in military exercises with Arctic area partners.

Shannon Jenkins, the Coast Guard’s senior Arctic policy advisor, said that his service has been in the Arctic for about 150 years. The Coast Guard works with Arctic nations to protect fisheries and conduct search and rescue missions, and, he said, the service is always prepared to respond to oil spills. He noted that the Coast Guard has very good relations with their Russian counterparts in these areas of mutual concern.

Jeffrey Barker, the Navy’s deputy branch head for policy and posture, noted that he and Jenkins are on a working group that led to the 2015 signing of the National Fleet Plan, an agreement that strengthened interoperability between the Navy and Coast Guard fleets. He said the working group meets quarterly to discuss Arctic security issues, among other things.

The Navy has more submarines in the Arctic than any other nation, Barker said. However, he added that the Navy never goes it alone. They work there with partner nations.

Incidentally, NOAA is one of the seven uniformed services, along with the Public Health Service, Army, Navy, Air Force, Marine Corps and Coast Guard.

Tagged with: the Department of Defense The U.S. Military