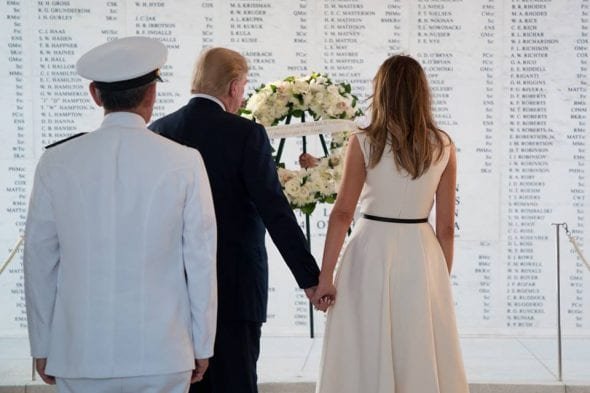 Today, we honor those who perished 77 years ago at Pearl Harbor, and we salute every veteran who served in World War II over the 4 years that followed that horrific attack.

On December 7, 1941, America was attacked without warning at Pearl Harbor, Hawaii, by the air and naval forces of Imperial Japan.  Just before 8:00 a.m., Japanese aircraft ripped through the sky, dropping bombs on ships of the United States Pacific Fleet and on nearby airfields and bases.  The attack took the lives of more than 2,400 American service members and wounded another 1,100 American citizens.  The brutal surprise attack halted only after nearly two hours of chaos, death, and destruction.

Despite the shock and confusion of the moment, American service members and first responders on the island of Oahu mounted an incredibly brave defense against insurmountable odds.  American pilots took to the air to engage enemy aircraft, sailors took their battle stations, and medical personnel cared for the wounded.  Many witnesses to the events of that day perished in the attacks, leaving countless acts of valor unrecorded.  Nevertheless, 15 Medals of Honor were awarded — 10 of them posthumously — to United States Navy personnel for acts of valor above and beyond the call of duty.

Although the United States Pacific Fleet at Pearl Harbor was badly impaired, America did not falter.  One day after the attacks, President Franklin Delano Roosevelt declared to the Congress:  “No matter how long it may take us to overcome this premeditated invasion, the American people in their righteous might will win through to absolute victory.”  And, in the weeks, months, and years that followed the brutal attack at Pearl Harbor, Americans united with a steadfast resolve to defend the freedoms upon which our great Nation was founded.  Millions of brave men and women answered their country’s call to service with unquestionable courage.  These incredible patriots fought, bled, sacrificed, and ultimately triumphed for the cause of freedom.

We are blessed as a Nation to have as examples the incredible heroes of World War II, who fought so valiantly to preserve all that we hold dear.  Earlier this year, I had the tremendous honor of meeting Mr. Ray Chavez, who was the oldest living Pearl Harbor veteran.  Ray passed away only a few weeks ago at the incredible age of 106.  But his legacy is forever etched into our country’s rich history, along with the legacies of all our brave veterans.  They tell of the mettle of the American spirit under fire and of the will of our people to stand up to any threat.  The selfless bravery and dedication of these extraordinary Americans will never be forgotten.

Today, we remember all those killed on the island of Oahu on that fateful Sunday morning in 1941, and we honor the American patriots of the Greatest Generation who laid down their lives in the battles of World War II.  America is forever blessed to have strong men and women with exceptional courage who are willing and able to step forward to defend our homeland and our liberty.

The Congress, by Public Law 103-308, as amended, has designated December 7 of each year as “National Pearl Harbor Remembrance Day.”

NOW, THEREFORE, I, DONALD J. TRUMP, President of the United States of America, do hereby proclaim December 7, 2018, as National Pearl Harbor Remembrance Day.  I encourage all Americans to observe this solemn day of remembrance and to honor our military, past and present, with appropriate ceremonies and activities.  I urge all Federal agencies and interested organizations, groups, and individuals to fly the flag of the United States at half-staff in honor of those American patriots who died as a result of their service at Pearl Harbor.

IN WITNESS WHEREOF, I have hereunto set my hand this sixth day of December, in the year of our Lord two thousand eighteen, and of the Independence of the United States of America the two hundred and forty-third.

Support Conservative Daily News with a small donation via Paypal or credit card that will go towards supporting the news and commentary you've come to appreciate.
Tags
Pearl Harbor Day Trump Administration