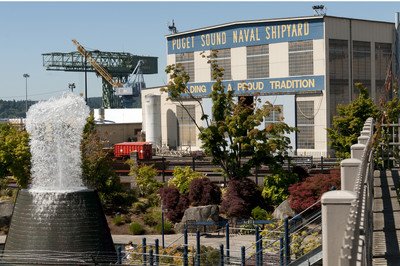 Navy Secretary Richard V. Spencer assured lawmakers that as part of the service’s efforts to modernize the force, it was moving forward on plans to upgrade and improve the Navy’s public shipyards, during testimony before the Senate Armed Services Committee’s seapower subcommittee.

2) The shipyards are all government-owned, government-operated facilities, part of the Navy’s organic industrial base, and are all considered critical to national security and readiness.

The shipyards do depot-level maintenance on the Navy’s fleet of nuclear aircraft carriers and submarines to ensure those ships and boats remain ready to fight.

3) The Navy’s first-ever ”Shipyard Infrastructure Optimization Plan” was delivered to Congress earlier this year, and spells out how the four shipyards will be upgraded and improved to better serve the fleet.

4) Overall, the Navy’s plan to bring into the modern age its four shipyards will cost some $21 billion and take approximately 20 years to complete.
That effort is underway now. ”The fact of the matter is, until we get our shipyards — specifically for our underwater fleet, our public shipyards, primarily — increased flow and increased efficiencies for throughput, we are hurting ourselves,” Spencer told the committee.

5) While physical infrastructure improvements at Navy shipyards are underway, improvements in other areas, such as the training of workers, has already shown great success, the secretary said.Spencer told lawmakers that in years past, training a shipyard employee might have taken as many as four years. But now, he said, that training time has been reduced to as little as a year for skills like marine machinists and pipefitters.

Support Conservative Daily News with a small donation via Paypal or credit card that will go towards supporting the news and commentary you've come to appreciate.
Tags
The US Navy
C. Todd LopezDecember 12, 2018
Facebook Twitter Reddit Telegram Share via Email Print