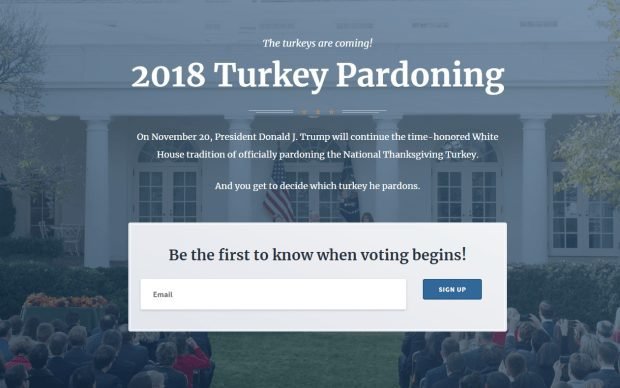 The White House is going to let Americans decide which of the two White House Turkeys gets to live out his days on farm and which one becomes Thanksgiving dinner.

“On November 20, President Donald J. Trump will continue the time-honored White House tradition of officially pardoning the National Thanksgiving Turkey,” the White House said on its website. “And you get to decide which turkey he pardons.”

The turkeys, temporarily being called Jeff and Ruben, arrived from Huron, South Dakota, on Sunday and are staying at the five-star Willard InterContinental Hotel. Their official names, chosen from a list of 600 provided by South Dakotans, will be revealed later today.

“People had a good time with thinking about names and in less than a week, we received all these suggestions from the public, like Rushmore or Dakota,” said Katlyn Richter, a South Dakota Department of Tourism spokeswoman.

The turkeys will be interviewed on Monday in a “press day” event and stay at the hotel until November 20th when President Trump, in a Rose Garden event, pardons whichever one America chooses. VOTE HERE.

Last year, President Trump pardoned both birds, Wishbone and Drumstick, and they are both living at Virginia Tech’s “Gobbler’s Rest” with 2016’s pardon recipients, Tater and Tot.

And the National Thanksgiving Turkey is… DRUMSTICK!

Support Conservative Daily News with a small donation via Paypal or credit card that will go towards supporting the news and commentary you've come to appreciate.
Tags
Thanksgiving The White House Trump Administration