A lawyer for the Democrat-connected law firm that commissioned an investigation into President Donald Trump’s links to Russia passed information to the FBI’s top attorney in the weeks before the 2016 presidential election.

James Baker, who served as FBI’s general counsel until he resigned in May, testified to Congress on Wednesday that Michael Sussmann, a lawyer for the firm Perkins Coie, provided documents and electronic media related to Russian meddling in the election.

Perkins Coie is the firm that hired opposition researcher Fusion GPS to investigate Trump. The result of the contract was the infamous but unverified Steele dossier alleging collusion between the Trump campaign and Russian government.

Sources familiar with Baker’s testimony to the House Judiciary and House Oversight & Government Reform Committees tell The Daily Caller News Foundation that he said Sussmann approached him for the meeting, which occurred in late summer or early fall 2016.

The meeting took place before the FBI submitted an application for its first FISA warrant against former Trump campaign adviser Carter Page. That warrant application, which was granted on Oct. 21, 2016, relied heavily on unverified allegations made in the report authored by former British spy Christopher Steele.

Steele had been hired by Fusion GPS in June 2016 to investigate Trump.

It is unclear exactly what information Sussmann, a former Justice Department prosecutor, provided to Baker and whether any of it related to the dossier. Sources tell TheDCNF that Baker testified that he did not read through the documents. He also testified that the meeting was atypical.

Sussmann, a former cyber crimes prosecutor, led the DNC’s effort to respond to Russian cyber attacks during the 2016 campaign. Sussmann helped hire CrowdStrike, the cybersecurity firm that identified Russia as being behind the intrusion.

DNC officials first met with senior FBI officials about the computer hacks in mid-June 2016, The New York Times reported on Dec. 13, 2016. Sussmann is not identified as taking part in the meeting, but he is quoted heavily in the Times piece.

Sussmann also appears to have provided information to Baker that was separate from hacks of the DNC’s computer systems.

“In September 2016 [redacted] shared similar information in a one-on-one meeting with FBI General Counsel James Baker,” reads a footnote in a report on Russian meddling released by the House Intelligence Committee’s report on April 27.

The report does not identify Sussmann, but it refers to an interview conducted with the committee on Dec. 18, 2017, the same day as Sussmann’s testimony.

The report goes on to say that at “around the same time as his meeting with FBI, [redacted] shared the information with journalists, including [redacted] of Slate, who published an article at the end of October.”

The footnote then cites an article published on Oct. 31, 2016, by Slate’s Franklin Foer. The piece claimed that the Trump Organization’s computer servers were secretly communicating with those of Alfa Bank, a Russian bank.

In the dossier, Steele refers to Alfa Bank and three of its owners. The report does not make the same allegations as those in the Foer report, but it does accuse Alfa Bank’s owners of working closely with the Kremlin.

There is some evidence that Fusion GPS co-founder Glenn Simpson pushed the Alfa Bank story to other government officials. The Washington Times has reported that Simpson told Justice Department official Bruce Ohr during a meeting in December 2016 that the allegations against Alfa Bank were accurate.

Sussmann did not respond to a request for comment. 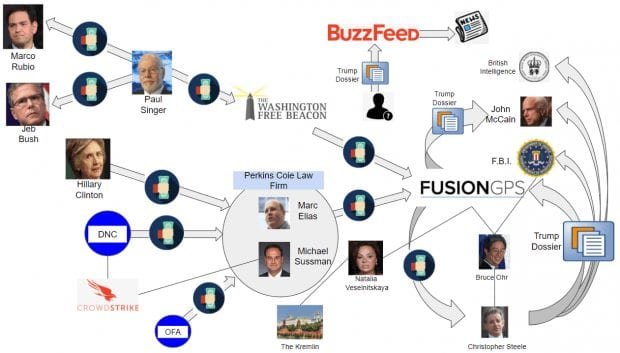 Support Conservative Daily News with a small donation via Paypal or credit card that will go towards supporting the news and commentary you've come to appreciate.
Tags
Michael Sussmann Perkins Coie the FBI the Steele dossier