At the end of a vote Saturday afternoon, Vice President Mike Pence announced that by a 50-48 tally, Brett M. Kavanaugh is confirmed as the 102nd Associate Justice of the United States Supreme Court.

The roll call had been interrupted a few times by protesters in the gallery. One who aimed her shrieks at Senator Jeff Flake (R-AZ), calling him a coward after his “yes” vote was recorded. Another began yelling “shame” at Senator Joe Manchin (D-WV) when he recorded a “yes” in favor of Kavanaugh.

Protesters outside the Supreme Court became suddenly quiet as the tally became public. Within minutes though, the chanting, shallow speeches, sign-waving and shrieking resumed.

The new Supreme Court Justice will be sworn in twice before he begins hearing oral arguments next week. One swearing-in will be a private, unceremonious event while the other will be a public ceremony. Either would be sufficient for him to sit on the bench at the highest court in the land.

President Trump applauded the confirmation and announced that he would certify Kavanaugh this afternoon so that he could be sworn-in.

I applaud and congratulate the U.S. Senate for confirming our GREAT NOMINEE, Judge Brett Kavanaugh, to the United States Supreme Court. Later today, I will sign his Commission of Appointment, and he will be officially sworn in. Very exciting! 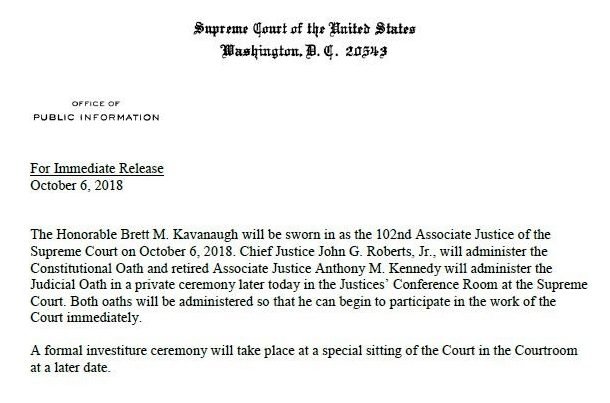 Just prior to boarding Marine One earlier, the president said that the vote capped off a great week and that Kavanaugh’s confirmation is part of an exciting time in U.S. history.

“A lot of very positive things happened in the last week,” he told reporters. “It’s a very exciting time.”

Kavanaugh’s confirmation moves the high court’s balance in favor of defending the Constitution and individual liberty over swaying to political winds. It is conceivable that President Trump could get the opportunity to put one more Justice on the court if Ruth Bader Ginsburg leaves the bench before his term is up. Should Trump win re-election in 2020, that would become even more certain. Ginsburg is 85 years-old.

Editor’s Note: This story was updated to reflect that while Vice President Mike Pence announced Kavanaugh as the 114th associate justice, the Supreme Court, in a statement, said that he is the 102nd.

Support Conservative Daily News with a small donation via Paypal or credit card that will go towards supporting the news and commentary you've come to appreciate.
Tags
Brett Kavanaugh The U.S. Senate