Supreme Court nominee Brett Kavanaugh sat for an interview with Senate investigators Tuesday, where he denied lawyer Michael Avenatti’s insinuations that his high school yearbook entry is replete with inside jokes pertaining to sexual depravity.

Avenatti represents a woman named Julie Swetnick, who claims Kavanaugh was present at debauched house parties in the early 1980s, including gatherings where women were targeted for gang rape. In his correspondence with the Senate Judiciary Committee — screenshots of which he posted on Twitter — Avenatti asserted the judge’s yearbook corroborates his client’s claims.

In one email dated Sept. 24, Avenatti said he had reason to believe a reference to the “FFFFFFFourth of July” which appears on Kavanaugh’s yearbook was an acronym for a series of obscene acts performed with women, while his listed membership in the “Devil’s Triangle” pertains to group sex with women.

My e-mail of this morning directed to Mr. Davis, Chief Counsel for Nominations for the U.S. Senate Judiciary Committee. The American people deserve to know the truth and evidence regarding the allegations. There must be no effort made to avoid it. pic.twitter.com/8pcdW0PqQ1

GOP Judiciary Committee lawyers asked Kavanaugh about both charges during the Tuesday interview, which he denied. Committee staff released transcripts of the interview Wednesday night.

Kavanaugh claimed the “FFFFFFFourth of July” entry was a reference to a friend who made liberal use of the f-word. 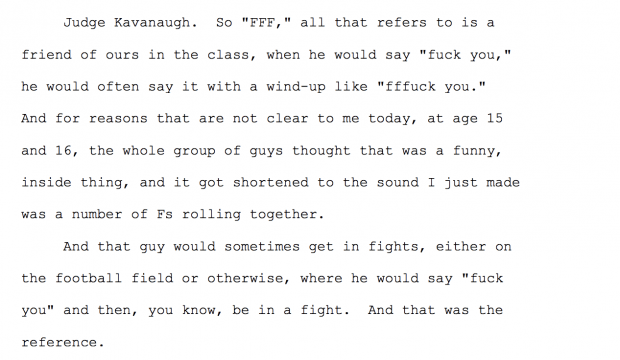 Kavanaugh also denied that the “Devil’s Triangle” entry referred to group sex with women, telling staffers it concerns a drinking game involving three glasses of beer arranged in a triangle. As a general matter, he said he has never had a sexual encounter with more than a single woman present. 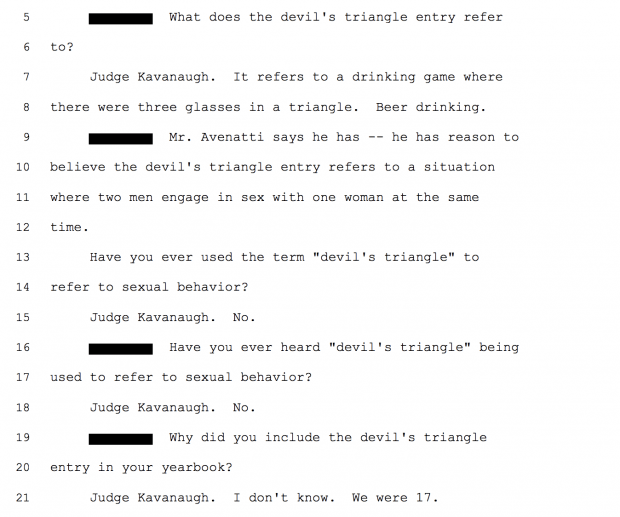 In a Monday night interview with Fox’s Martha MacCallum, Kavanaugh claimed he did not have sexual intercourse while he was in high school.

Support Conservative Daily News with a small donation via Paypal or credit card that will go towards supporting the news and commentary you've come to appreciate.
Tags
Brett Kavanaugh Michael Avenatti