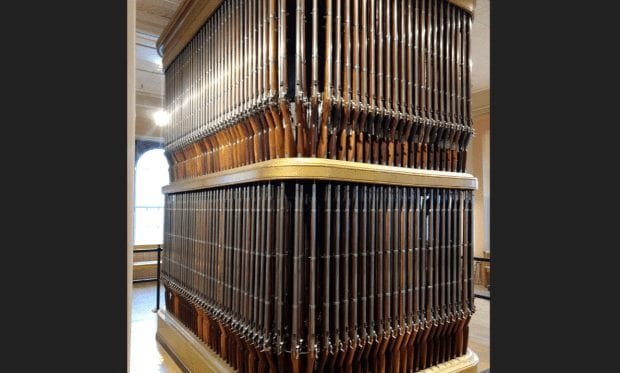 Warriors and their families toured the Springfield Armory National Historic Site during a recent Wounded Warrior Project® (WWP) outing. This armory consistently supplied our armed forces from 1794 until 1964.

“This local landmark was something we’ve never had a chance to learn more about, until now,” said Army veteran John Hendricks. “We loved it.”

Warriors and their families learned about the history of Springfield firearms. In addition to exploring the exhibits, young visitors could obtain Junior Ranger certification or even be part of special exhibits and historical re-enactments.

WWP program gatherings bring injured veterans, their families, and their communities together. In a WWP survey of the wounded warriors it serves, more than half of survey respondents (51.6 percent) expressed they talk with fellow veterans to address their mental health issues.

“Wounded Warrior Project has always been there for me and my fellow warriors,” John said. “They are there whenever I feel down and want to be around and talk to other warriors.”

Isolation is one of the most significant struggles wounded warriors deal with after serving their country. It can be difficult knowing how to overcome that challenge and rekindle bonds similar to those formed in the military. Connecting with fellow service members and people in the community creates a veteran support structure during the healing process – because wherever veterans are on their journeys, they shouldn’t have to go it alone.

Support Conservative Daily News with a small donation via Paypal or credit card that will go towards supporting the news and commentary you've come to appreciate.
Tags
Springfield Armory Veterans Wounded Warrior Project