FEMA Administrator Brock Long said Sunday that his agency’s rescue and recovery efforts will be difficult, long lasting and could impact as far North as Ohio.

“This is going to be a long, frustrating recovery,” he said during an interview on “Fox News Sunday.”

Long also said that the dangerous portion of Florence isn’t over and it won’t be limited to North Carolina.

“Unfortunately, we’ve still got several days to go,” he told Fox News Channel’s Chris Wallace. “Not only are you going to see more impacts across North Carolina, particularly as it moves from the Central to the Western area, dumping copious amounts of rains, but we’re also anticipating we’re about to see a lot of damage going through West Virginia all the way up to Ohio.”

The storm has killed 13 people since making landfall. The first deaths came as a mother and her infant child were killed when a tree fell on their home in North Carolina. The most recent deaths came as a South Carolina couple died from carbon monoxide poisoning inside their home, according to Horry County law enforcement officials.

Winds in the storm have slowed to about 35 mph, but the main threat now comes from flooding as the tropical depression that was formerly Florence dumps massive amounts of rain over areas where the rivers and streams are already nearing or over flood stage.

“The flood danger from this storm is more immediate today than when it made landfall just over 24 hours ago,” North Carolina Gov. Roy Cooper said in a press release Saturday. “More people now face imminent threat than when the storm was offshore. I cannot overstate it: Flood waters are rising. If you aren’t watching for them, you are risking your life.

At the time of publication, the U.S. Geological Survey’s (USGS) River Observation map showed 74 river gauges nearing flood stage, 59 experiencing minor flooding, 15 with moderate flooding and 13 reading major flooding in the area – and it’s only going to get worse. 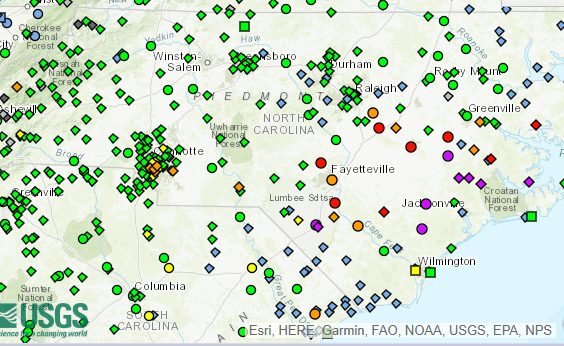 New Bern, North Carolina Mayor Dana Outlaw said many of the area’s creeks are “increasing by the hour,” during an interview on NBC’s Meet the Press.

NOAA and the USGS forecast that over 100 flood gauges will report flooding, 35 of those moderate to major flooding mostly along the Lumberton, Cape Fear, Little, Haw Rivers. The Dan River in Southern Virginia is also expected to experience major flooding. 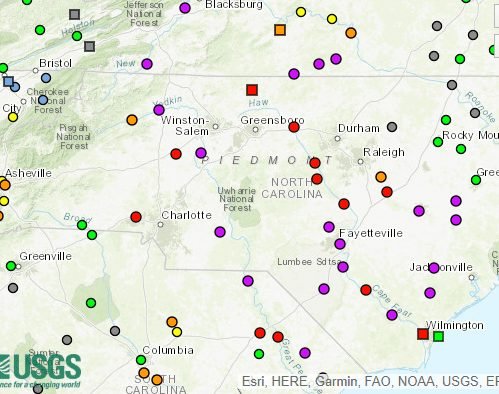 So much rain, an estimated 40 inches, has fallen that NOAA’s precipitation observation map for the region ran out of colors to show how much rain had fallen. The key only has enough colors to show up to 20 inches.