President Donald Trump issued a state of emergency Wednesday night for Hawaii as the island chain prepares for Hurricane Lane, a Category 4 cyclone charging through the Pacific at breakneck pace.

The storm is sustaining wind speeds of 145 mph and forecaster tell reporters it’s “on course to pass very close” to the islands or make landfall from Thursday through Friday. Hawaii has not seen a hurricane in more than two decades. 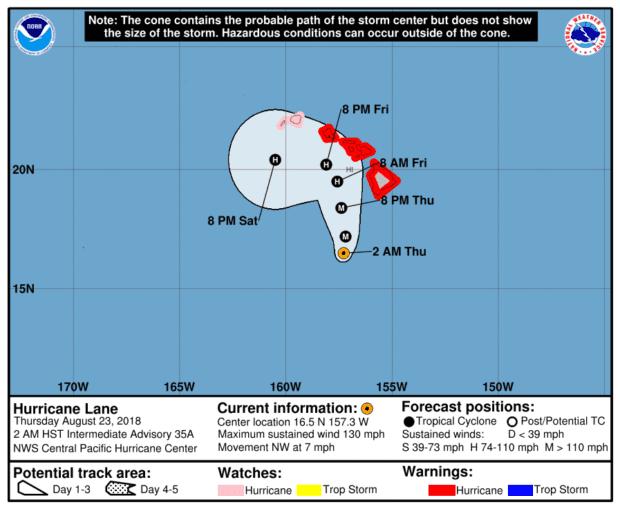 Officials are asking citizens to prepare for the worse. “Be prepared to shelter in place with 14 days of food supplies and water and any other necessities,” Hawaii Gov. David Ige said at a press conference Wednesday.

Hurricane Lane is heading for Hawaii as a dangerous Category 4 storm https://t.co/TYcn4vXKMS pic.twitter.com/Fd8Z67PbcL

The storm was traveling through the Pacific about 235 miles south-southwest of the Big Island town of Kailua-Kona early Thursday.

Citizens, few of whom have ever witnessed the sheer force of a fast-moving cyclone, are flocking to grocery stores “(I’m) filling up my bathtub with some water, hoping to board up my main windows in time,” a shopper on the Big Island told CNN Tuesday.

Many others are leaving. The state’s 15 airports will remain open as long they don’t suffer any major infrastructure damage, the Hawaii Department of Transportation said in a statement.

This is what hurricane Lane looks like from space as it bears down on Hawaii pic.twitter.com/geT6BtuyET

More than eight inches of rain were reported Wednesday on the Big Island, the National Weather Service office in Honolulu said, noting also that the downpours could also lead to landslides and storm surge. “The combination of a dangerous storm surge and large breaking waves will raise water levels by as much as 2 to 4 feet above normal tide levels along south and west facing shores near the center of Lane,” the hurricane center said.

Support Conservative Daily News with a small donation via Paypal or credit card that will go towards supporting the news and commentary you've come to appreciate.
Tags
Hawaii Hurricane Lane hurricanes