The progressive-led war on statues took another victim Monday night as a gathering of snowflakes toppled the Silent Sam statue at the University of North Carolina (UNC) in Chapel Hill.

Just before 9:30 Monday evening, about 250 people that had gathered near the statue watched it fall. The statue was toppled purposefully by members of the group who believe it, and all other Confederate memorials from the Civil War, are symbols of racism.

Around 9:20 p.m., a group from among an estimated crowd of 250 protesters brought down the Confederate Monument on the campus of the University of North Carolina at Chapel Hill. Tonight’s actions were dagerous, and we are very fortunate that no one was injured. We are investigating the vandalism and assessing the full extent of the damage.

A statement about the Confederate Monument at UNC-Chapel Hill pic.twitter.com/7D45yiAAeb

“The Governor understands that many people are frustrated by the pace of change and he shares their frustration, but violent destruction of public property has no place in our communities,” he posted on Twitter.

Silent Sam was placed on the campus in 1913 as a memorial to UNC students who had fought and fallen during the Civil War as soldiers in the Confederate Army. The statue depicts a student dropping his books and heading to war. 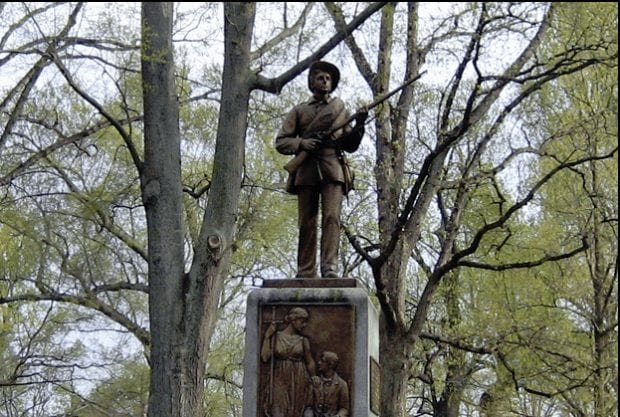 Most saw the statue as a solemn reminder of a war that divided the nation, but the small group of vandals that decided to take matters into their own hands saw it as a symbol of white supremacy intended to intimidate African-Americans.

“Stand up, fight back” the protesters chanted, and “hey, hey, ho, ho, this racist statue has got to go.”

One person was taken into police custody during the protest for concealing one’s face during a public rally and resisting arrest.

This destruction of public property is a continuing trend on the left as liberals increasingly circumvent legal process and commit acts of violence when they don’t get their way and the statue wasn’t the only target of their anger.

“Clint Procell, 31, wore a Trump hat,” The News & Observer reported. “Procell said he wanted to see for himself how intolerant the people protesting Silent Sam were, and the experience didn’t disappoint. He said he was pushed and his hat was temporarily stolen.”

Just after the statue fell, protesters stomped on it and tried to cover it with dirt before police stepped-in and covered it with a tarp. Silent Sam was then loaded on a truck and taken away.

The university has not said what will become of Silent Sam or what will ultimately be placed at the statue’s former location.

Support Conservative Daily News with a small donation via Paypal or credit card that will go towards supporting the news and commentary you've come to appreciate.
Tags
North Carolina Silent Sam The War on Statues University of North Carolina