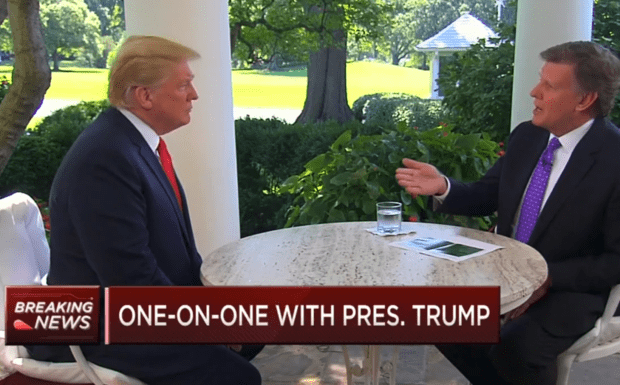 The markets initially reacted to the president’s comments in a CNBC interview that aired Friday morning. Trump said he’s “ready to go” on tariffs against all Chinese imports worth over $500 billion.

“I’m not doing this for politics, I’m doing this to do the right thing for our country,” the president said. “We have been ripped off by China for a long time.”

The U.S. and China are embroiled in a trade spat in which both countries have added tariffs on $36 billion in trade goods with another $16 billion set to go into effect soon.

“We are being taken advantage of,” he said of other country’s unfair trade practices. “I don’t like it.”

The president also revealed that a senior Chinese official told him just how the massive trade imbalance came to be.

“How did this ever happen,” he asked the official.

The president added that the Chinese said that they would increase the size of tariffs over time and “no one ever complained until [Trump] came along.”

Support Conservative Daily News with a small donation via Paypal or credit card that will go towards supporting the news and commentary you've come to appreciate.
Tags
China Stock Market tariffs trade