Halfway through 2018, prices are at record highs, inventory is at record lows and home sales are trailing 2017’s pace, according to the RE/MAX National Housing Report.

June sales were 5.5% lower than June 2017 in the 54 metro areas surveyed, marking the seventh consecutive month of year-over-year declines.

Headed in the opposite direction, the June Median Sales Price of $258,500 was an all-time high in the nine-year history of the report. It was 5.1% higher than the $245,000 recorded last June, bringing the consecutive months of year-over-year price increases to 27. In each of the previous five years – going back to June 2013’s $193,750 – June has posted the highest Median Sales Price of the year.

“Year-over-year prices have been climbing for more than two years now, which is great news for homeowners and sellers,” said RE/MAX CEO Adam Contos. “In the hottest markets, demand is especially high because there simply aren’t that many homes for sale. The slower sales figures we’re seeing are tied to inventory more than anything else.” 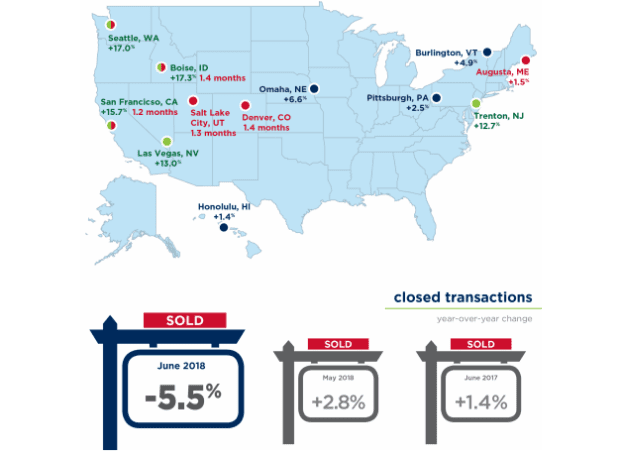 Forty-two of the 54 metro areas reported a year-over-year drop in inventory. That years-long trend is reflected in Months Supply of Inventory dropping to 2.7 – down 8.8% year-over-year and the smallest figure ever recorded for June. Fewer houses for sale generally results in a faster process: Homes sold in June averaged just 42 Days on Market – five days less than June 2017 and three days under the previous nine-year low of 45 days (July 2017).

“Lack of inventory has become a theme for the year,” Contos said. “Having fewer homes to choose from poses a challenge for buyers, who need to be ready to act decisively and quickly. Working with a full-time, professional RE/MAX agent can prepare them for that.”

Months Supply of Inventory – Average of 54 metro areas
The number of homes for sale in June 2018 was up 2.5% from May 2018, and down 8.8% from June 2017. Based on the rate of home sales in June, the Months Supply of Inventory increased to 2.7 from 2.5 in May 2018, and decreased compared to June 2017 at 2.8. A 6.0-months supply indicates a market balanced equally between buyers and sellers. In June 2018, all but one of 54 metro areas surveyed reported a months supply at or less than 6.0, which is typically considered a seller’s market. The markets with the lowest Months Supply of Inventory are in the west with San Francisco, CA, at 1.2, Salt Lake City, UT, 1.3, and Boise, ID and Denver, CO, both tied with 1.4.

Support Conservative Daily News with a small donation via Paypal or credit card that will go towards supporting the news and commentary you've come to appreciate.
Tags
home sales real estate