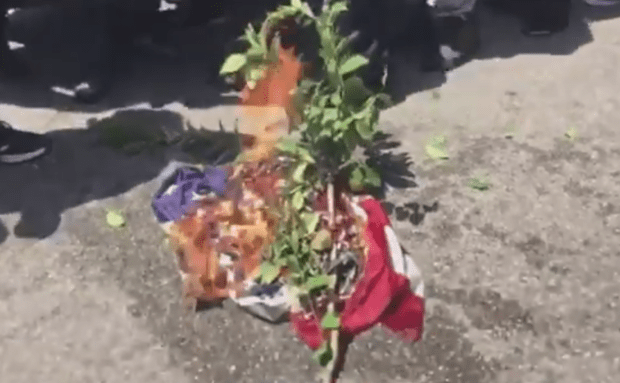 “America was never great”, “This is not the American flag, this is their flag”,  and “black power” were central themes shouted by the protesters. The group stole a flag from a passing vehicle, demonstrating a clear penchant for criminal activity during their protest, and then burned it.

A small crowd that gathered Thursday outside the Los Angeles office of U.S. Rep. Maxine Waters to counter an expected protest by a self-styled militia group burned an American flag taken from the back of a pickup truck.

The protesters showed up to counter an Oath Keepers event where the Constitution-defending organization had intended to peacefully protest Maxine Waters’ call for attacks on Trump administration officials.

We went there to conduct a peaceful protest against Maxine Waters’ inflammatory incitement of harassment and intimidation, with her calling on her followers to harass members of the Trump Administration, saying:

“If you see anybody from that [Trump] Cabinet in a restaurant, in a department store, at a gasoline station, you get out and you create a crowd and you push back on them! And you tell them that they are not welcome, anymore, anywhere”

The Oath Keepers were told by local police that the Waters’ supporters had brought weapons including metal pipes and bats to their event and that LAPD would retreat if violence broke out.

LAPD added that if a riot occurred, and we were attacked, the LAPD officers would withdraw and we would be on our own.

According to Oath Keepers founder Stewart Rhodes, police also told them that their group would be policed heavily and prevented from carrying any defensive weapons while the Waters group would not be searched or disarmed.

It should be noted that the protesters on our side would have been unarmed and the police would not have allowed them to carry any weapons to defend themselves with. LAPD made it clear they would have policed and controlled our protesters only, to the point of regulating how thick a stick we could use for a sign, but would not have policed or controlled the Maxine Waters supporters.  As was done in Berkely, twice, we would have been prevented from carrying pepper spray,chemical mace, riot shields, collapsible batons or any other means of self-defense.

With no guarantee of a police presence, no ability to defend themselves, and the obviously violent intentions of the Waters’ supporters, the Oath Keepers decided to cancel their protest.

Given the high likelihood of lethal force violence (steel pipes and baseball bats to the head are clearly lethal force), and out of concern for the safety of other peaceful protesters such as the MAGA Girls, our advance team leader, Johnny Itliong, made the decision to cancel the protest.

“You can’t even hold a peaceful protest in front of Maxine Waters’ office, protesting her incitement of her supporters to violence, without facing the violence of her supporters, to the point of lethal force,” Rhodes said.

Maxine Waters’ supporters don’t appear to like free speech or America very much. 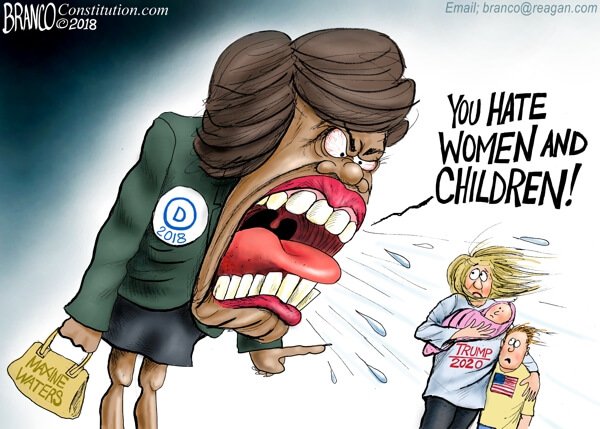 Support Conservative Daily News with a small donation via Paypal or credit card that will go towards supporting the news and commentary you've come to appreciate.
Tags
Maxine Waters Oath Keepers